Tests at a school beside an informal electronic waste salvage site in Ghana's capital Accra reveal contamination due to lead, cadmium and other health-threatening pollutants over 50 times higher than risk-free levels.

A produce market, a church headquarters and a soccer field are likewise polluted to varying degrees, all neighbours of the Agbogbloshie scrap metal site, where electronic trash is scavenged for valuable metals - especially copper. Schoolchildren as young as six work around bonfires of circuitry, plastic and other leftover high-tech trash.

Ironically, experts say critical metals and other elements in all that destroyed equipment -- much of it castoffs from Europe and North America -- may soon be in short supply, which threatens to drive up the cost of products ranging from flat-screen TVs and mobile phones to electric cars and wind turbines.

The contamination test results were shared by Ghana researcher Atiemo Sampson at this year's Solving the E-waste Problem (StEP-Initiative) Summer School, hosted in Europe by Philips and Umicore for 20 of the field's most promising international graduate researchers.

The sampling -- for iron, magnesium, copper, zinc, cadmium, chromium, nickel and lead -- showed dangerous contamination at the school and market; both had levels roughly half those measured at the site where the e-waste is incinerated. In soil around the school site alone, measurements of lead were 12 times higher and cadmium 2.5 times higher than the levels at which intervention is required.

Mr. Sampson adds that similar e-waste sites are being created elsewhere in Ghana.

"Until now, Ghana has not regulated the importation and management of e-waste," says Mr. Sampson, who in addition to his research with Ghana's Atomic Energy Commission and PhD pursuit at the University of Ghana, is working on a Diploma in International Environmental Law through UNITAR. "Although Ghana is a signatory to the Basel Convention (which regulates the import and export of hazardous wastes), rules are only now being incorporated into our national legal framework. The government hopes to have new rules in place next year."

"The sheer number of people engaged in informal recycling in the Agbogbloshie scrap yard makes it increasingly unthinkable politically to eject them from that location," adds Mr. Sampson.

"The livelihood of many people now depends on the income generated by these activities at e-waste scrap yards. Therefore any solution must recognize their role and focus on improving health, safety and environmental standards."

While international shipments of electronic trash are outlawed by international agreement, European and North American e-waste nonetheless makes it way to Africa and Asia. Unscrupulous handlers often incorporate e-waste into cargo containers, along with functional and reusable equipment, the import-export of which is permitted.

A Ghanaian government study this year reported that in 2009 the country imported some 215,000 tons of electronics, 70% of which were used items. Of the 70%, some 15% were trash. And many of the usable products become e-waste relatively quickly due to their shorter lifespan compared to new items.

The report says the informal recycling sector does a disproportionate amount of harm to the environmental and human health of Ghanians and recommended further development of a legal framework for electronics importation and responsible processing.

Other participants in the StEP Summer School, convened from all world continents, reciprocated insights and experiences from their respective countries. Chinese researcher Xinwen Chis, for example, detailed intricate patterns of collaboration between the country's emerging, formal state-of-the art recyclers and the informal recycling entrepreneurs. Other discussions included, for example, Latin American initiatives to create a permanent platform for regional collaboration and sharing of best e-waste management practices and a Costa Rican e-waste take-back regulation, the first of its kind in the region.

Closing the resource loop -- in other words, preventing the loss of the valuable elements in e-waste through efficient recycling, public and stakeholder mobilization, and better product design -- was the theme of the 2011 StEP E-waste Summer School.

PhD researchers and Masters students from all continents and different disciplines were engaged in an active program of study tours, lectures with industry leaders, and an exchange of research findings. Stops in Eindhoven, Netherlands, and Antwerp, Belgium, included interacting with industry leaders, recyclers, representatives from the European Commission, Interpol, academics, policy makers, civil servants and NGO leaders.

Together, participants developed the idea of a Critical Metals Stewardship Model, presented and discussed with fellow participants at the World Resources Forum in Davos, Switzerland:

Among the students' conclusions:

Current global processes do not yet favor the recovery and conservation of critical metals from e-waste.

Technological issues: Many regions lack adequate technology and training. And, even where adequate technologies exist, the sheer sophistication of products and the use of ever smaller quantities of elements makes it increasingly difficult and expensive to recover them.

Economic issues: Commodity markets fail to distinguish between recycled and raw materials. As long as the price for primary critical metals remains low (and fails to include a recycling expense), there is little incentive to refine such elements.

Political issues: In many places, greater leadership and political will is needed to regulate e-waste management and enforce existing laws and regulations.

"While great strides are being made by leaders among industry and governments to collect and recycle e-waste, further interventions in the form of regulations, standards or product take-back and labelling schemes, for example, are essential to effect some of the additional progress required," says Ruediger Kuehr, the StEP Initiative Executive Secretary.

Philips, is now applying "life cycle thinking" as it re-engineers and designs some of its products with insights from recyclers to facilitate metal recovery. Other manufacturers are incorporating more recycled content into their equipment (metals and plastics), while some are actively recovering key elements, such as phosphors from lamps, ensuring continuity in their supply chain.

Umicore, meanwhile, is pioneering the complex processes involved in extracting various metals from e-waste, including many scarce and valuable metals. At a state-of-the-art facility near Antwerp, Belgium, Umicore recovers more than 17 metals from mobile phones, printed circuit boards and rechargeable batteries.

Rolf Widmer of the Swiss Federal Laboratories for Materials Science and Technology (EMPA): "We might delay the predicted shortage of certain metals such as indium if governments today helped even the playing field and promoted the recycling and use of secondary critical metals." Currently, less than 1% of indium is recycled from end-of-life products.

Dr. Kuehr notes that, "in addition to the annual e-waste school for students, a similar educational forum is needed geared towards policy makers and their environmental protection agencies. Policy makers of today would benefit and it could help start a transition on situations like the Agbogbloshie scrap yard. The StEP-Initiative is working on extending its global capacity building activities in collaboration with other partners." 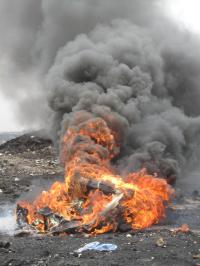