A collaboration between KAUST and several UK institutes has revealed that surface currents are important pathways for gene flow in the Red Sea, a finding which will help guide marine management programs.

The team, led by KAUST professor Ibrahim Hoteit, combined satellite imagery and simulations to explore the role of currents in the Red Sea biosphere. Coral communities are relatively homogenous throughout most of the Red Sea, although a genetic break separates the southern communities.

The team used satellite measurements of the color and height of Red Sea surface waters to infer current flows. By estimating chlorophyll concentrations from the color data, they also determined which currents were able to carry biological material. Their analysis identified significant variability in Red Sea eddies which could facilitate transport and dispersal throughout the whole basin.

Building on their findings, the team simulated how these currents would disperse particles through the Red Sea. By calculating connectivity values between different sites, they showed that the central Red Sea is quite well connected to the rest of the basin, while the southern region is the least connected.

Next, the researchers compared the results of the circulation flow with genetic data from Red Sea clownfish. The genetic distance between clownfish populations correlated well with connectivity, suggesting that water circulation patterns played a significant role in determining the population's distribution. "It was exciting to establish that Red Sea connectivity can be characterized by flows based on satellite data, matching extremely well the patterns of clownfish gene data that were collected at the eastern coast," says Hoteit.

By improving our understanding of how circulation affects dispersal in the Red Sea ecosystem, these findings will help guide the conservation efforts and the designation of marine protected areas. "As satellite datasets are freely available globally, our analysis demonstrates a cost-effective tool to estimate biophysical connectivity remotely, which may support coastal management in data-limited regions," says lead author Dionysios Raitsos, now of Plymouth Marine Laboratory.

The researchers plan to continue investigating Red Sea circulation, combining long-term high-resolution models and observations to understand connectivity near the shore and in deeper regions, as well as between the Red Sea and the Indian Ocean. "Our goal is to unravel the main pathways of connectivity in the Red Sea and determine the most important source reefs, which we like to call 'mother reefs', and reveal regions that are most connected within or even outside the Red Sea," says Hoteit. 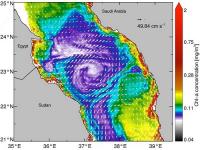