RapidScat data on September 8 at 7 a.m. EDT showed that the strongest sustained winds concentrated around the center of Linda's tight circulation and were stronger than 30 meters per second (108 kph/67 mph). At that time, hurricane force winds extended outward up to 30 miles (45 km) from the center and tropical storm force winds extend outward up to 105 miles (165 km). The image was created by the RapidScat team at NASA's Jet Propulsion Laboratory, Pasadena, California.

On September 8 at 5:10 p.m. EDT (21:10 UTC) the MODIS instrument aboard NASA's Aqua satellite captured a visible image of Hurricane Linda that showed its center west of Baja California, Mexico. The image also showed Linda maintained an eye and that the clouds in the hurricane's eastern quadrant were over the southern Baja.

Linda was moving toward the northwest near 12 mph (19 kph). The National Hurricane Center forecast calls for a northwestward motion with some decrease in forward speed is expected through Thursday, September 10.

Maximum sustained winds have decreased to near 100 mph (155 kph) with higher gusts. Rapid weakening is expected during the next 48 hours, and Linda is forecast to weaken to a tropical storm by early Thursday, and become a remnant low by Friday morning. The estimated minimum central pressure is 969 millibars.

Infrared satellite imagery showed that Linda's cloud top temperatures have warmed indicating less uplift in the storm to create powerful thunderstorms. The National Hurricane Center noted that the cloud pattern has continued to deteriorate overnight and Linda's eye had become much less distinct.

There are no coastal watches or warnings in effect. However, Hurricane Linda is generating rough surf along the southern coasts of Baja California. Those are expected to spread northward into southern California by Thursday, September 10.

Rain from the edge of Linda could affect southern Baja California as the storm continues moving north toward the southwestern U.S. over the next several days. 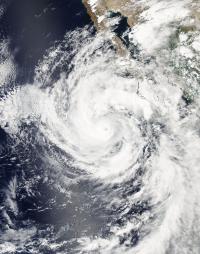