"Climate models don't do a great job of simulating global ocean circulation because they can't simulate the small scales that are important for deep ocean mixing," said Ryan Holmes, a graduate student at Stanford's School of Earth, Energy & Environmental Sciences.

The meridional overturning circulation, or MOC, is a global ocean conveyor belt wherein surface waters cooled in the high latitudes flow along deep currents toward the equatorial regions, where they mix with warmer, less dense water and rise to the surface. This upwelled water eventually flows towards the higher latitudes to complete the cycle. One circuit takes hundreds to thousands of years to complete.

The MOC is important for transporting heat, salt and carbon around the globe and influences the rate at which carbon stored in the deep ocean is exchanged with the atmosphere. But until now, scientists only had a rough sense of where in the tropical oceans this mixing-driven upwelling occurs.

To better understand mixing in the tropical oceans, James Moum, a professor of physical oceanography at Oregon State University, organized a five-week research cruise in the equatorial Pacific and invited Holmes, who had been investigating equatorial mixing in ocean models for his PhD dissertation. The group brought along an experimental sensor called a ?-pod (pronounced "kai-pod") that is designed to measure turbulence all the way to the seafloor - 4000 meters, or nearly 2.5 miles, below the surface.

"Upwelling requires mixing of waters with different temperatures and therefore different densities. What we measured using the ?-pod is the turbulence that generates this mixing," Holmes said. "This marked the first time that anyone had ever measured mixing to these depths on the equator."

Two weeks into the cruise, the team encountered a patch of strong turbulence occurring along a 2,300-foot (700-meter) vertical stretch of water near the ocean bottom. This was surprising because the seafloor in that part of the ocean was relatively flat, and for many years, scientists had assumed that intense deep ocean mixing required water to flow over rugged bottom features such as seamounts or ridges.

"This was the first time that anyone had observed turbulence over smooth topography that was as strong as that found over rough topography," Holmes said.

To understand what was happening, Moum enlisted the help of Leif Thomas, an expert in the physics of ocean circulation at Stanford and Holmes' graduate advisor.

Using computer models, Thomas and Holmes were able to simulate how winds blowing across the ocean surface can generate "internal waves" that propagate vertically down through the ocean depths and transport the energy required to mix waters at the seafloor. However, their model was not able to reproduce the observed abyssal mixing: Instead of generating turbulence, the internal waves ping-ponged between two vertical bands of water on either side of the equator and the smooth seafloor without breaking.

"These waves in the model were trapped to the equator between two vertical bands that act like funhouse mirrors bouncing light rays back and forth," said Thomas, an associate professor in the department of Earth System Science.

The Stanford scientists were stumped-until Thomas had the idea to incorporate the horizontal component of the Earth's spin, conventionally disregarded in ocean models, into their simulation. Thomas recalled from his previous studies that the horizontal spin of strong currents, such as the Gulf Stream, could cause internal waves in the mid-latitudes to amplify and break when they reflect off the bottom of the ocean. "It occurred to me that internal waves at the equator, where the effects of the horizontal component of the Earth's spin are most pronounced, could experience an analogous behavior when the waves reflect off the seafloor," Thomas said. "With this in mind, I suggested to Ryan to explore this idea."

Thomas' hunch proved correct. The Stanford scientists found that in the equatorial waters they were modeling, the Earth's rotation imparts a subtle vertical motion to moving objects. This nudge is enough to disrupt the reflection of internal waves, trapping them near the ocean bottom and focusing their energy to generate turbulence.

"We included this horizontal component and found that it changed the physics of waves in the deep equatorial oceans, potentially causing them to break and drive turbulence and mixing," Holmes said.

The new findings highlight the critical importance of deep equatorial waters for Earth's climate system, Thomas said. "Scientists have long known that the equatorial upper ocean is critical for the physics of interannual variations in climate such as El Niño," he said. "Our new study suggests the abyssal ocean at the equator could impact the climate system on much longer timescales." 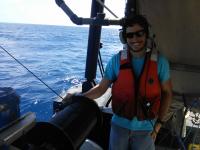