Experiments using parasitic worms in the mouse gut have revealed a surprising new form of wound repair, a finding that could help scientists develop ways to enhance the body's natural healing abilities.

Researchers have long believed that adult stem cells contribute to wound healing in tissues like the gut and skin, but a new paper by UC San Francisco scientists -- published online June 27th in Nature -- found that as parasites dug into mouse intestinal walls, the gut responded by reactivating a type of cell growth previously seen in fetal tissues.

"I'd be surprised if there aren't similar mechanisms in other tissues," said UCSF's Ophir Klein, MD, PhD, the Larry L. Hillblom Distinguished Professor in Craniofacial Anomalies, the Charles J. Epstein Professor of Human Genetics, and one of the senior authors of the paper. "This discovery could be paradigm-shifting in terms of our understanding of how the mammalian body can repair damage," Klein said. "This gives us a new target to go after."

Adult stem cells in the intestines are vital for maintaining the digestive status quo. The gut lining is made up of epithelial cells which absorb nutrients and produce protective mucus. These cells are replaced every few days by the stem cells at the base of crypts -- indentations in the gut lining. Researchers expected that the same stem cells could also help repair tears in the gut.

Wounds created through injury, surgery, or accident can be helped or hindered by time, blood circulation, bacteria, movement, moisture, and any number of other factors. Because so many different factors are involved in wound recovery, successful healing of even common external injuries remains a clinical challenge; internal wounds have proven difficult to treat as well.

To explore this topic, Ysbrand Nusse, a graduate student in the Klein lab, joined forces with Adam K. Savage, PhD, a postdoctoral researcher in the lab of UCSF gut immunologist Richard Locksley, MD, who is the Marion and Herbert Sandler Distinguished Professor in Asthma Research, a Howard Hughes Medical Institute investigator, and the paper's other senior author.

For Locksley, parasite-host relationships are ideal systems to study for researchers who want to understand basic biology in a real-world context. For example, Locksley's lab recently used parasitic infections to uncover the previously mysterious signaling capabilities of rare gut cells called tuft cells, which turn out to play a key role in detecting parasites and remodeling gut tissue to prevent future parasitic invasion.

Locksley encouraged Nusse and Savage to study the role of stem cells in wound healing using this sort of natural system rather than more artificial models or cultured cells, so they infected mice with a tiny nematode called Heligmosomoides polygyrus. "This parasite is present in many of the mice in Golden Gate Park here in San Francisco," said Locksley, "and anywhere else there are wild mice. It's a naturally evolved interaction in the gut."

Larvae from parasites like H. polygyrus invade the gut lining in a mouse's intestine, burying themselves to develop in the tissue. Based on prevailing ideas in the field, the scientists predicted that, in response, nearby stem cells would increase their productivity and patch up the worm-created wounds.

Instead, signs of the stem cells in worm-infected areas disappeared entirely; fluorescent markers that should have been expressed by one of the genes in the regular stem cell program vanished. And yet, even with no identifiable stem cells in the area, the wounded tissue regenerated more quickly than ever. "Like with all great projects, the very first observation was: 'This makes no sense,'" said Locksley.

The researchers spent years trying to resolve this mystery. After a number of false starts and dead ends, the team eventually noticed the recurrence of a different gene, known as Sca-1. Using antibody staining for the Sca-1 protein, the researchers realized that where the stem cell genes had disappeared, a different gene program was expressed instead: one that resembled the way that mouse guts develop in utero.

"The gut is repurposing a fetal state in order to recover from injury," said Klein, who is a professor of orofacial sciences in the UCSF School of Dentistry and of pediatrics in the School of Medicine. He also serves as Chief of the Division of Medical Genetics and as Chair of the Craniofacial Division at UCSF.

The researchers wondered whether the reactivation of this fetal program was a specific response to parasite infections, or if it could be a general strategy for many kinds of gut injury. Additional experiments showed that shutting down gut stem cells with irradiation or genetically targeting them for destruction triggered aspects of the same response: despite an absence of detectable stem cell activity, undifferentiated tissue grew rapidly nonetheless.

Because damage in the gut can quickly lead to bacterial infections and other serious conditions, Locksley speculates that the findings reveal a reactivation of developmental mechanisms designed to produce new tissue as fast as possible -- in the case of tissue injury in the gut, the best response may simply be to close the wound as soon as possible.

"The fetal program is about covering real estate very quickly," said Locksley. Later, once the acute injury is repaired, the gut may return to the normal stem cell program of producing differentiated cells that perform specific functions.

"I think this is comparable to the way that amphibians regenerate," said Nusse, explaining that when an amphibian loses a limb, it forms a mass of cells which appear to reverse their mature differentiation and recover fetal capabilities. "Mammals weren't thought to do that, but it seems that after injury the gut is able to reactivate these developmental programs."

Many other injured tissues could benefit from the ability to quickly and efficiently make generalized repairs before returning to specialized adult cell production, opening up therapeutic opportunities. For example, developing treatments that bestow an ability to control the change between adult and fetal genetic programs might offer new strategies to manage conditions such as inflammatory bowel disease (IBD).

Research has shown that the presence of gut parasites can be protective against diseases like IBD, and people with the condition have even taken to intentionally infecting themselves with parasites as a nontraditional remedy. "Maybe if we can figure out why that treatment helps some people," said Klein, "we can figure out a less off-putting, more medical way to treat them."

Funding: This work was supported by National Institutes of Health (NIH) grants AI026918, AI030663 and U01DK103147 from the Intestinal Stem Cell Consortium, the Howard Hughes Medical Institute (HHMI), the California Institute for Regenerative Medicine (RN3-06525) and the Sandler Asthma Basic Research Center at the University of California, San Francisco. Savage is an HHMI Fellow; Nusse was awarded a Genentech Graduate Fellowship in 2014.

Conflicts: De Sauvage is an employee of Genentech and owns shares in Roche. 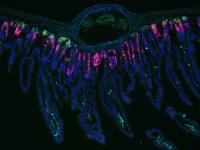 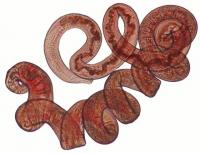