A growing "dead zone" in the middle of the Arabian Sea has allowed plankton uniquely suited to low-oxygen water to take over the base of the food chain. Their rise to dominance over the last decade could be disastrous for the predator fish that sustain 120 million people living on the sea's edge.

Scientists at Columbia University's Lamont-Doherty Earth Observatory and their colleagues are the first to document the rapid rise of green Noctiluca scintillans, an unusual dinoflagellate that eats other plankton and draws energy from the sun via microscopic algae living within its cells. Noctiluca's thick blooms color the Arabian Sea an emerald green each winter, from the shores of Oman on the west, to India and Pakistan on the east.

In a study published this week in Nature Communications, the researchers show how the millions of green algae living within Noctiluca's cells allow it to exploit an oxygen-starved dead zone the size of Texas. They hypothesize that a tide of nutrient-rich sewage flowing from booming cities on the Arabian Sea is expanding the dead zone and feeding Noctiluca's growth.

"These blooms are massive, appear year after year, and could be devastating to the Arabian Sea ecosystem over the long-term," said the study's lead author, Helga do Rosario Gomes, a biogeochemist at Lamont-Doherty.

Until recently, photosynthetic diatoms supported the Arabian Sea food chain. Zooplankton grazed on the diatoms, a type of algae, and were in turn eaten by fish. In the early 2000s, it all changed. The researchers began to see vast blooms of Noctiluca and a steep drop in diatoms and dissolved oxygen in the water column. Within a decade, Noctiluca had virtually replaced diatoms at the base of the food chain, marking the start of a colossal ecosystem shift.

Green Noctiluca lives in the tropics while its close relative, red Noctiluca scintillans, whose blooms can sometimes kill fish with their high ammonia content, prefers temperate waters. Green Noctiluca is remarkably willing to eat anything. It feeds on other plankton, living or dead, flushing diatoms and other plankton into its gullet with a flick of its flagellum. It also draws energy from the millions of green algae, or "endosymbionts," living within its transparent cell walls. The algae fix carbon from sunlight and pass the energy, like rent, on to their host.

A varied diet gives Noctiluca its edge. "They can swim down to find nutrients, up to find light, and they can eat other small organisms," said Sharon Smith, a plankton ecologist at the University of Miami who works in the Arabian Sea but was not involved in the study.

To understand the key to Noctiluca's success, the researchers spent three successive winters aboard the Indian research ship Sagar Sampada, starting in 2009. Sailing off the coast of Goa, they sampled blooms and performed experiments. Putting Noctiluca and its diatom competitors in oxygen-starved water they found that Noctiluca's carbon-fixation rate rose by up to 300 percent while the diatoms' fell by nearly as much. They also found Noctiluca grew faster in light than in dark, thanks to its sun-loving endosymbiont-algae, which are thought to have evolved 1.3 billion years ago on an oxygen-scarce Earth.

The researchers tried to also identify Noctiluca's predators. They had heard reports of Omani fishermen seeing more gelatinous salps, jellyfish and sea turtles. Could they be eating the Noctiluca? Scooping up several salps from the sea, the researchers dropped them into buckets of seawater thick with Noctiluca blooms. In an hour, the water became visibly clearer. By measuring the drop in chlorophyll, the researchers estimated that one salp can polish off about two-thirds of a bucket of Noctiluca in an hour.

"They chowed on Noctiluca, like rabbits in a lettuce patch," said Gomes. "This is a creature that few other marine animals want to eat."

Noctiluca is too big for the crustacean grazers that normally feed on diatoms, leading to concerns that it could spawn an alternate food chain lacking the predator fish people like to eat. Many fisheries in the Arabian Sea are already on a slow decline. Eighty-five percent of fishermen surveyed in the fishing-dependent states of Tamil Nadu and Maharashtra in India reported a smaller catch from 20 years and 12 years earlier, according to a 2014 study in the journal Oryx. Similarly, a rise in puffer fish off the coast of the Indian state of Kerala has been attributed to a crash in predator cobia fish since 2007, according to a 2013 study in Current Science. In Oman, the catch of large fish fell 18 percent in 2013 from the year before, the Times of Oman reported.

Whether Noctiluca or overfishing is to blame, one major factor stands out: massive sewage flows into the Arabian Sea as the coastal population has exploded. As the study authors point out, Mumbai's population has doubled to 21 million in the last decade. The region now sends 63 tons of nitrogen and 11 tons of phosphorus into the Arabian Sea each day. Karachi's 15 million people send 70 percent of their wastewater into the sea untreated. Much of the fertilizer used to boost yields on farms in South Asia also eventually washes into rivers that drain into the sea.

"All of these cities are growing so rapidly they don't have the capacity to treat their sewage," said study coauthor Joaquim Goes, a biogeochemist at Lamont-Doherty. "The amount of material being discharged is humongous."

From the Gulf of Mexico to Chesapeake Bay, dead zones and degraded fisheries are on the rise globally. Doubling in size each decade, and now covering more than 95,000 square miles, they are "probably a key stressor on marine ecosystems," according to a 2008 study in Science. Shifting ocean currents due to climate change can make the problem worse by dredging up nutrients from the ocean bottom.

In the Arabian Sea, stronger summer monsoon winds have boosted algae growth by bringing more nutrients from the deep ocean to the surface. In a 2005 study in Science, Goes, Gomes and colleagues showed that biomass from summer blooms off Somalia, Yemen and Oman, jumped nearly 350 percent between 1997 and 2004. They hypothesize that receding snow cover in the Himalaya-Tibetan plateau is making the Indian subcontinent hotter in summer compared to the Arabian Sea, strengthening the winds that blow toward India, bringing up more nutrients off Somalia, Yemen and Oman.

The researchers expected gentler monsoon winds in winter, as the process reversed itself, leading to fewer algae blooms. But NASA satellite maps showed just the opposite: more winter blooms. After several years of sampling what they thought were sporadic Noctiluca blooms, the researchers realized in 2006 that the blooms seen from space were not diatoms but recurring Noctiluca blooms.

They wondered if falling oxygen levels could explain the diatom-to-Noctiluca shift. Sure enough, the experiments aboard the Sagar Sampada seemed to confirm their hypothesis.

The study has attributed much of Noctiluca's rise to growing sewage flows into the Arabian Sea, an intriguing connection that should be followed up on, says Andrew Juhl, a microbiologist at Lamont-Doherty who was not involved in the study. "It's unusual for Noctiluca to bloom in the open sea and return year after year," he said "All of these observations suggest that something dramatic has changed in the Arabian Sea." 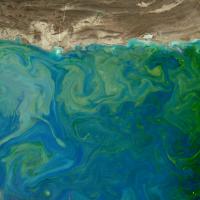