Alexandria, VA – A complex interaction between lava and water, rather than a fight between mythical troll-beasts of lore, is responsible for the occurrence of rare terrestrial basalt pillars. EARTH Magazine uncovers the truth behind the pillars in the February issue. Despite regional tales of a fight between a pair of angry trolls resulting in the moss-covered basalt pillars, geoscientists from the University at Buffalo have determined that the pillars formed during a rare, nonexplosive lava-water interface during the 1783 eruption at Laki. Find out more about these pillars at http://bit.ly/MRSvJF.

Also read EARTH's a three-part feature series on the 2013 Colorado Front Range flooding and learn whether ancient mosquitoes also feasted on blood in the February 2014 edition of EARTH Magazine available on the digital bookstand, or by subscription.

Keep up to date with the latest happenings in Earth, energy and environment news with EARTH magazine online at http://www.earthmagazine.org/. Published by the American Geosciences Institute, EARTH is your source for the science behind the headlines.

The American Geosciences Institute is a nonprofit federation of 50 geoscientific and professional associations that represents more than 250,000 geologists, geophysicists and other earth scientists. Founded in 1948, AGI provides information services to geoscientists, serves as a voice of shared interests in the profession, plays a major role in strengthening geoscience education, and strives to increase public awareness of the vital role the geosciences play in society's use of resources, resiliency to natural hazards, and interaction with the environment. 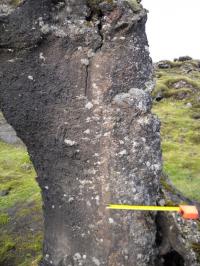