DURHAM, N.C. -- Duke engineers have devised a way to improve the efficiency of lithotripsy -- the demolition of kidney stones using focused shock waves. After decades of research, all it took was cutting a groove near the perimeter of the shock wave-focusing lens and changing its curvature.

"I've spent more than 20 years investigating the physics and engineering aspects of shock wave lithotripsy," said Pei Zhong, the Anderson-Rupp Professor of Mechanical Engineering and Materials Science at Duke University. "And now, thanks to the willingness of Siemens (a leading lithotripter manufacturer) to collaborate, we've developed a solution that is simple, cost-effective and reliable that can be quickly implemented on their machines."

The study appears online the week of March 17, 2014, in the Proceedings of the National Academy of Sciences.

The incidence of kidney stones in the United States has more than doubled during the past two decades, due at least in part to the expanding waistlines of its citizens. The condition has also been linked to hot, humid climates and high levels of stress—a combination of living environments that seems to have led to a rise in kidney stone rates of veterans returning home from Iraq and Afghanistan.

During the past two decades, lithotripter manufacturers introduced multiple changes to their machines. Rather than having patients submerged in a bath of lukewarm water, newer machines feature a water-filled pouch that transfers the shock wave into the flesh. An electrohydraulic shock wave generator used in the past was replaced by an electromagnetic model that is more powerful, more reliable and more consistent.

The new designs made the devices more convenient and comfortable to use, but reduced the effectiveness of the treatment. After years of research, Zhong and his colleagues have determined why.

The increased power in some third-generation shock wave lithotripters narrowed the wave's focal width to reduce damage to surrounding tissues. But this power jump also shifted the shock wave's focal point as much as 20 millimeters toward the device, ironically contributing to efficiency loss and raising the potential for tissue damage. The new electromagnetic shock wave generators also produced a secondary compressive wave that disrupted one of the primary stone-smashing mechanisms, cavitation bubbles.

"We were presented with the challenge of engineering a design solution that mitigated these drawbacks without being too expensive," said Zhong. "It had to be something that was effective and reliable, but also something that the manufacturer was willing to adopt. So we decided to focus on a new lens design while keeping everything else in their system intact."

The solution was to cut a groove near the perimeter of the backside of the lens and change its geometry. This realigned the device's focal point and optimized the pressure distribution with a broad focal width and lower peak pressure. It also allowed more cavitation bubbles to form around the targeted stone instead of in the surrounding tissue.

In laboratory tests, the researchers sent shock waves through a tank of water and used a fiber optic pressure sensor to ensure the shock wave was focusing on target. They broke apart synthetic stones in a model human kidney and in dead pigs and used a high-speed camera to watch the distribution of cavitation bubbles forming and collapsing—a process that happens too fast for the human eye to see.

The results showed that while the current commercial version reduced 54 percent of the stones into fragments less than two millimeters in diameter, the new version pulverized 89 percent of the stones while also reducing the amount of damage to surrounding tissue. Smaller fragments are more easily passed out of the body and less likely to recur.

"We feel we have exceeded expectations in our evaluation of this new lens design, which is based on solid physics and engineering principles," said Zhong, who expects the new lens to enter clinical trials in Germany this summer.

"My hope is that this will be a breaking point demonstrating that effective, interactive collaboration between academia and industry can really improve the design of lithotripters that will benefit millions of stone patients worldwide who suffer from this painful disease," Zhong said. "Our design, in principle, can be adapted by other manufacturers to improve their machines as well. I would like to see all lithotripsy machines improved so that urologists can treat stones more effectively and patients can receive better treatment and feel more comfortable with the procedure."

This research is a collaborative effort between Zhong's group in the Pratt School of Engineering and Dr. Glenn Preminger's group in urologic surgery at Duke University Medical Center, together with Sorin Mitran's group in the department of mathematics at UNC - Chapel Hill. Andreas Neisius, a urology fellow from Mainz, Germany, and Nathan Smith, a postdoctoral Fellow in Zhong's group, made equal contributions as first authors.

This work was supported by the National Institutes of Health (grant R37-DK052985-17) and a Ferdinand Eisenberger grant of the German Society of Urology (ID NeA1/FE-11).

Journal
Proceedings of the National Academy of Sciences
Funder
German Society of Urology, 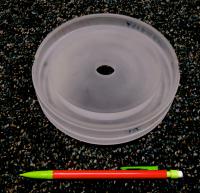