Sea otters have long been recognized as a classic example of a keystone species, a dominant predator that maintains the balance of kelp forest ecosystems by controlling populations of sea urchins, which are voracious kelp grazers.

Since 2014, however, California's kelp forests have declined dramatically, and vast areas of the coast where kelp once thrived are now "urchin barrens," the seafloor carpeted with purple sea urchins and little else. This has occurred even in Monterey Bay, which hosts a large population of sea otters.

In 2017, UC Santa Cruz graduate student Joshua Smith set out to understand why. "Here in Monterey Bay, we now have a patchy mosaic, with urchin barrens devoid of kelp directly adjacent to patches of kelp forest that seem pretty healthy," Smith said. "We wanted to know how did this sea urchin outbreak happen where there are so many otters, how did the otters respond, and what does that mean for the fate of kelp forests here on the Central Coast?"

Working with a team of sea otter researchers at UCSC, the U.S. Geological Survey, and the Monterey Bay Aquarium, Smith conducted intensive underwater surveys along the Monterey Peninsula over a span of three years. The study built on decades of long-term monitoring of sea otter populations and kelp forest ecosystems along the California coast.

Smith's findings, published March 8 in Proceedings of the National Academy of Sciences, tell a fascinating story of how the behavioral responses of predators and prey to changing conditions can determine the fate of an entire ecosystem.

It began in 2013 with the outbreak of a mysterious disease called sea star wasting syndrome, which decimated sea stars all along the West Coast. Among the hardest hit species was the sunflower sea star (Pycnopodia helianthoides), a major sea urchin predator. But according to Smith, that was just one factor leading to a massive outbreak of sea urchins.

"We believe several factors initiated the urchin outbreak," he said. "The loss of a major urchin predator was soon followed by a decline in kelp productivity due to climatic stressors."

In kelp forests, sea urchins mostly occupy crevices in rocky reefs on the seafloor where they are protected from predators. Pieces of kelp drift down onto the reef like falling leaves in a forest, delivering food directly to the urchins in their shelters.

Kelp thrives where cold, nutrient-rich water wells up along the coast from the ocean depths, and giant kelp (the dominant species on the Central Coast) can grow more than a foot per day in good conditions. In 2014, however, an unprecedented marine heatwave hit the Northeast Pacific. Known as "the blob," it spread over the West Coast from Alaska to Central California. Around the same time, a major El Niño event brought warm water up the coast from the south.

With all that warm water bathing the coast, kelp growth rates dropped dramatically. That meant less kelp detritus drifting into the crevices of the reefs, and sea urchins began to emerge in search of food. With no sea stars around to attack them, the urchins mowed down the living kelp fronds, turning kelp forests into urchin barrens.

"It happened so fast, before we knew it we had lost over 80 percent of the historic kelp forest cover in Northern California," Smith said. "We also had an urchin outbreak on the Central Coast, but not to the same extent as in the areas north of San Francisco."

Smith and his colleagues found that sea otters on the Central Coast responded to the urchin outbreak by increasing their urchin consumption dramatically, eating about three times as many sea urchins as they had prior to 2014. Thanks to an abundance of prey (including an increase in mussels as well as urchins), the sea otter population increased substantially after 2014, from about 270 to about 432 sea otters in the Monterey region at the southern end of Monterey Bay.

Yet the urchin barrens remained. A close look at sea otter foraging behavior explained why. Smith's team found that the otters were feeding on urchins in the remaining patches of kelp forest, but not in the urchin barrens.

"It's easy to see from shore where they are diving repeatedly and coming up with sea urchins," he said.

The dive team surveyed those places, as well as areas not being targeted by otters, and collected urchins to examine in the lab. The researchers found that urchins from the kelp beds had much higher nutritional value than those from the urchin barrens, with large, energy-rich gonads. In the barrens, however, the urchins are starved and not worth the effort to a hungry otter.

"Some people call them zombie urchins," Smith said. "You open them up, and they're empty. So the otters are ignoring the urchin barrens and going after the nutritionally profitable urchins in the kelp forest."

By doing this, the sea otters are helping to maintain those patches of healthy kelp forest, which are now crucially important for the persistence of giant kelp along the coast. Spores produced from those remaining patches could eventually reseed the barren areas and restore the kelp beds.

Sea otters alone, however, won't disrupt the urchin barrens. Some other factor is needed to clear enough urchins from the barrens to enable new kelp plants to grow there. Smith said another predator could help knock down the urchin population, or a disease, or even a major storm bringing large, bottom-scouring waves. Some groups are even exploring human interventions, sending teams of volunteer divers out to remove sea urchins in an effort to restore the kelp forests.

Mark Carr, professor and chair of ecology and evolutionary biology at UC Santa Cruz, said the differences between kelp forests on the southern, central, and northern coasts of California are striking. Carr, who is Smith's adviser but not a coauthor of the PNAS paper, has been studying kelp forests all along the West Coast for years. He said Southern California's kelp beds did not decline to the extent seen on the central and northern coasts.

"The difference in Southern California is that even though they lost the sea stars, they have other predators like the spiny lobster and California sheephead that are able to control urchin populations and allow the kelp forests to persist," Carr said.

Northern California's kelp beds, in contrast, have fared much worse. The absence of sea otters north of San Francisco may be a factor, but it's hard to say because the dominant species of canopy-forming kelp is different, with bull kelp (Nereocystis leutkeana) dominant in the north and giant kelp (Macrocystis pyrifera) dominant on the central and southern coasts.

"It is possible that the presence of a healthy sea otter population in the north might have made those kelp forests more resilient, but it's hard to speculate," Carr said. "The role of a predator can be very different depending on where you are."

The pioneering studies of sea otters and kelp forests conducted in the Aleutian Islands by James Estes, now a professor emeritus of ecology and evolutionary biology at UCSC, showed that as the sea otter population in the Aleutians recovered from near extinction, the otters transformed urchin barrens into kelp forests as they recolonized islands. But those interactions are playing out differently on the Central Coast, and could have yet another outcome in Northern California.

"This study not only fine tunes our understanding of the role of sea otters in kelp forests, it also emphasizes the importance of animal behavior," Smith said. "So much of this is driven by behavior--the urchins shifting their behavior to active foraging, and the otters choosing to prey on healthy urchins in the kelp forest--and these behavioral interactions have implications for the overall fate of the ecosystem."

In addition to Smith, the coauthors of the paper include Joseph Tomoleoni and Sophia Lyon at the USGS Western Ecological Research Center, Michelle Staedler and Jessica Fujii at the Monterey Bay Aquarium, and Tim Tinker at UC Santa Cruz. This research was supported by the National Science Foundation. 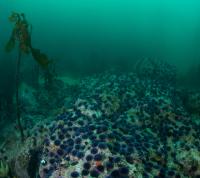 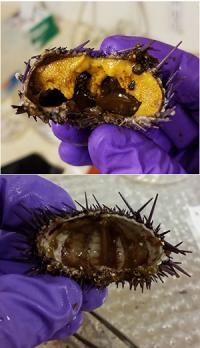