Scientists would like to apply the same principles by which baking soda removes food odors from refrigerators or silica powder keeps moisture away from electronic devices to scrub carbon dioxide from the exhaust gases of fossil fuel power plants. An excellent candidate for this task is the class of materials known as multivariate metal organic frameworks or MTV-MOFs, which were discovered by Omar Yaghi, one of the world's most cited chemists. However, finding and synthesizing the best MTV-MOFs for this task has been a major challenge. That discouraging state-of-affairs is about to change.

Yaghi and a team of researchers at Lawrence Berkeley National Laboratory (Berkeley Lab) and the University of California (UC)Berkeley that included Jeffrey Reimer and Berend Smit have developed a method that accurately predicts the adsorptive properties of crystalline MTV-MOF systems synthesized with different combinations of functional chemical groups.

"By combining solid-state nuclear magnetic resonance (NMR) measurements with molecular-level computational simulations we've identified a strategy for determining the underlying structure of MTV-MOFs that can help optimize function," says Reimer, who holds joint appointments with Berkeley Lab's Environmental Energy Technologies Division and UC Berkeley's Chemical and Biomolecular Engineering Department and is an NMR expert. "Our method is a first step in resolving the more general problem of spatial disorder in other ordered materials, including mesoporous materials, functionalized polymers and defect distributions within crystalline solids."

MOFs are crystalline molecular systems that can serve as storage vessels with a sponge-like capacity for capturing and containing carbon dioxide and other gases. They consist of a metal oxide center surrounded by organic "linker" molecules to form a highly porous three-dimensional crystal framework with an extraordinarily large internal surface area - sugar cube-sized MOF unfolded and flattened would blanket a football field.

In his seminal work, Yaghi discovered that multiple linkers with different functional groups can be incorporated into the same MOF crystal, creating a heterogeneous interior that can enhance selectivity for carbon dioxide capture relative to mixtures of pure materials.

The selectivity by which MTV-MOFs adsorb carbon dioxide, or some other specific type of gas, such as methane or hydrogen, is controlled by the combination of different types of linker functional groups and how those linker groups are spatially distributed or "apportioned" across the MOF's crystal structure. However, such apportionment was not known and could not be determined through diffraction or other conventional scientific tools.

"The problem of linker distribution with MTV-MOF's turns out to be an example of a larger problem in materials science, which is how does one quantify disorder when it is distributed upon a system that is governed by crystalline order," Yaghi says. "In the case of MTV-MOFs, were it not for the differing functional groups on the linkers, all would exhibit the same regular crystalline order, which means diffraction methods cannot discern the apportionment of the linkers."

The research team used their NMR-computational approach to generate three-dimensional maps of the apportionment of functional groups within and between the pores of a model MTV-MOF system. They found that, depending on the composition of the functional groups and their ratios, MTV-MOFs exist in either clusters, random or alternating apportionments, and these apportionments govern the carbon dioxide adsorption selectivity that was observed in Yaghi's earlier work.

"Our work portends the control of apportionment in MTV-MOFs so that we can now imagine synthesizing structures in which regions of different functionalities are apportioned and juxtaposed to ultimately carryout complex functions," says Smit. "Our work also shows that a combined NMR-computational approach might be able to provide similar insights into the many other systems in nature where disorder precludes a molecular understanding of a material's structure."

Adds Yaghi, "It is our current vision to design and synthesize materials with crafted heterogeneity so as to carry out complex molecular operations such as recognizing, sorting and counting substrates."

This research was supported through the Center for Gas Separations Relevant to Clean Energy Technologies, an Energy Frontier Research Center funded by the DOE Office of Science.

A path to better MTV-MOFs 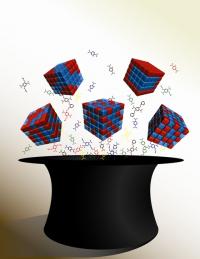