Diseases such as tuberculosis, anthrax, and shigellosis -- a severe food-borne illness -- eventually could be treated with an entirely new and more-effective kind of antibiotic, thanks to a team of scientists led by Kenneth Keiler, an associate professor of biochemistry and molecular biology at Penn State University. In a research paper that will be published in the journal Proceedings of the National Academy of Sciences during the week beginning 3 June 2013, the team describes 46 previously untested molecules that target and disrupt an important step in the process of protein synthesis in bacteria, thereby rendering bacteria incapable of replicating.

This step, known as trans-translation, is a "quality control" mechanism that is found in all species of bacteria and that other life forms, such as plants and animals, do not seem to use. "If you imagine the bacterial protein-synthesis pathway as a factory assembly line, trans-translation is responsible for keeping the assembly line moving. Faulty messenger RNA (mRNA) -- which is RNA that conveys genetic information from DNA to proteins -- can block the synthesis machinery. Trans-translation removes these blocks from the assembly line, thereby keeping the system running smoothly," Keiler explained. "Were it not for trans-translation, all the subsequent steps in the factory assembly line would get held up and the organism would not be able to function properly -- synthesizing the proteins that it needs for survival."

To discover which small molecules might be capable of disrupting trans-translation, the team began with a process called high-throughput screening -- a method of trying out many thousands of small molecules in multiwell Petri dishes with the hope of discovering one or more that might be effective at combatting certain pathogens. "Our team tested about 663,000 different molecules," Keiler said. "Specifically, we tested the molecules against a strain of E. coli and monitored how they were affecting the organism's trans-translation process." At the end of this phase of testing, Keiler and his team had found 46 different molecules that appeared to be effective in the disruption of trans-translation.

The next step was to test these molecules' efficacy at disturbing trans-translation in other bacteria that are known to cause illness, namely Shigella -- a genus of bacteria that causes food poisoning and that is related to Salmonella -- and Bacillus anthracis -- the organism that causes anthrax, which sometimes can be lethal in humans and other animals. "Of the 46 molecules that were shown to affect trans-translation, one called KKL-35 jumped out as the most promising," Keiler said. "We found that it inhibits the growth of very distantly related bacteria, and this suggests that it may have antibiotic activity against a very broad spectrum of species. As for Shigella and Bacillus anthracis, we were able to show that, in the presence of KKL-35, the cells died specifically because the molecule halted the trans-translation process."

In addition to Shigella and Bacillus anthracis, Keiler's team also studied Mycobacterium tuberculosis -- the organism that causes tuberculosis. The team found that, compared with currently used tuberculosis drug therapies, the KKL-35 molecule was 100-fold more effective at inhibiting the growth of the bacterium.

Keiler added that one of the most exciting features of an antibiotic designed from KKL-35 concerns the unlikeliness of drug resistance in mutant strains of bacteria. "In our laboratory experiments, we found no mutant strains that were resistant to KKL-35," Keiler said. "One possible explanation for the lack of resistant mutants in lab experiments is that changes in trans-translation molecules that disrupt drug binding also eliminate trans-translation activity. Resistant mutants probably would evolve eventually, but at least it looks like it will be very difficult. That means resistant mutants might be slow to arise and spread."

IMAGES
Two high-resolution images associated with this research are online at http://www.science.psu.edu/news-and-events/2013-news/Keiler5-2013

New kind of antibiotic may be more effective at fighting tuberculosis, anthrax, and other diseases 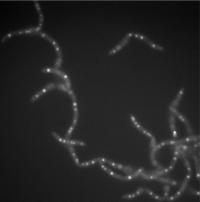