Using lasers to excite just one atom from a cloud of ultra-cold rubidium gas, physicists have developed a new way to rapidly and efficiently create single photons for potential use in optical quantum information processing – and in the study of dynamics and disorder in certain physical systems.

The technique takes advantage of the unique properties of atoms that have one or more electrons excited to a condition of near-ionization known as the Rydberg state. Atoms in this highly excited state – with a principal quantum number greater than 70 – have exaggerated electromagnetic properties and interact strongly with one another. That allows one Rydberg atom to block the formation of additional excited atoms within an area of 10 to 20 microns.

That single Rydberg atom can then be converted to a photon, ensuring that – on average – only one photon is produced from a rubidium cloud containing hundreds of densely-packed atoms. Reliably producing a single photon with well known properties is important to a several research areas, including quantum information systems.

The new technique was scheduled to be reported April 19 in Science Express, the rapid online publication of the journal Science. The research was supported by the National Science Foundation (NSF), and by the Air Force Office of Scientific Research (AFOSR).

"We are able to convert Rydberg excitations to single photons with very substantial efficiency, which allows us to prepare the state we want every time," explained Alex Kuzmich, a professor in the School of Physics at the Georgia Institute of Technology. "This new system offers a fertile area for investigating entangled states of atoms, spin waves and photons. We hope this will be a first step toward doing a lot more with this system."

Kuzmich and co-author Yaroslav Dudin, a graduate research assistant, have been studying quantum information systems that rely on mapping information from atoms onto entangled pairs of photons. But the Raman scattering technique they have been using to create the photons was inefficient and unable to provide the number of entangled photons needed for complex systems.

"This new photon source is about a thousand times faster than existing systems," Dudin said. "The numbers are very good for our first experimental implementation."

To create a Rydberg atom, the researchers used lasers to illuminate a dense ensemble of several hundred rubidium 87 atoms that had been laser-cooled and confined in an optical lattice. The illumination boosted a single atom from the entire cloud into the Rydberg state. Atoms excited to the Rydberg state strongly interact with other Rydberg atoms, and under suitable conditions, modify the atomic level energies and prevent more than one atom from being transferred into this state – a phenomenon known as the Rydberg blockade.

Rydberg atoms show this strong interaction within a range of 10 to 20 microns. By limiting their starting ensemble of rubidium atoms to approximately that distance, Kuzmich and Dudin were able to ensure that no more than one such atom could form.

"The excited Rydberg atom needs space around it and doesn't allow any other Rydberg atoms to come nearby," Dudin explained. "Our ensemble has a limited volume, so we couldn't fit more than one of these atoms into the space available."

Kuzmich and Dudin have been using Rydberg atoms with a principal quantum number of approximately 100. These excited atoms are much larger – as much as a half-micron in diameter – than ground state rubidium atoms, which have a quantum number of 5 and a diameter of a few Angstroms.

Once a highly excited atom was created, the researchers used an additional laser field to convert the excitation into a quantum light field that has the same statistical properties as the excitation. Because the field was produced by a single Rydberg atom, it contained just one photon, which can be used in a variety of protocols.

For the Georgia Tech group, the next goal may be development of a quantum gate between light fields. The quantum gating of photons has been proposed and pursued by many research groups, so far unsuccessfully.

"If this can be realized, such quantum gates would allow us to deterministically create complex entangled states of atoms and light, which would add valuable capabilities to the fields of quantum networks and computing," Kuzmich said. "Our works points in this direction."

"Our results also hold promise for studies of dynamics and disorder in many-body systems with tunable interactions," Kuzmich explained. "In particular, translational symmetry breaking, phase transitions and non-equilibrium many-body physics could be investigated in the future using strongly-coupled Rydberg excitations of an atomic gas."

The single-photon work complements research being done in the Kuzmich lab on long-lived quantum memories. A new Air Force Office of Scientific Research Multidisciplinary University Research Initiative (MURI) was recently awarded to a consortium of seven U.S. universities that will work together to determine the best approach for generating quantum memories based on interaction between light and matter. Georgia Tech leads the MURI.

"With this new work, we have demonstrated a new, deterministic source of single photons," Kuzmich said. "In its first experimental realization, it already out-performs other types of single photons that have been pursued during the past decade around the world, including in our group. With further increases in efficiency and generation rate – and integration with long-lived quantum memories being developed in related work – such a single-photon source may make possible optical quantum information processing." 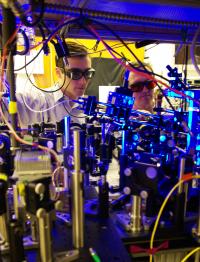 Yaroslav Dudin and Alex Kuzmich, Georgia Institute of Technology (2 of 3)

Yaroslav Dudin and Alex Kuzmich, Georgia Institute of Technology (3 of 3)