In 2005, a 17-year-old boy named William was fighting a brain tumor for the second time in two years.

Rally Foundation founder and CEO Dean Crowe asked the teen's parents a simple question. "What can I do to help? And I will not make you dinner. This situation is so past dinner," he said.

William's mother, Nancy Olson, replied, "Raise money for childhood cancer research and fund the best research, wherever it may be."

Fast forward to 2020, and MUSC Hollings Cancer Center researcher Jezabel R. Blanco, Ph.D., pauses her research to take a Zoom call. She sees the faces of executives from the Rally Foundation and learns she has won a prestigious inaugural $300,000 research award. She is thrilled, as she is one of only two recipients in the country who will receive the Rally Career Development Award for Young Investigators.

What really gives her chills, though, is who else is on the call.

"The family of the child, the one who passed away from pediatric brain cancer and inspired the foundation to be created, was also on the call when I learned about winning this award," Blanco said. "It was breathtaking because this grant will fund research for the same type of tumor that took the life of their child."

It was a deeply felt moment for Crowe as well, who described how special it was when he saw the final scores for the inaugural Rally Career Development Award and realized that Blanco had won for her research on medulloblastoma.

"I felt like William was smiling down from heaven. It was very fitting. We are honored to be funding her cutting-edge research and believe that it will provide translational and clinical relevance for kids fighting medulloblastoma. We have high hopes for Dr. Blanco as an emerging thought leader in medulloblastoma."

Blanco, who is originally from Spain, took a circuitous route to end up studying medulloblastoma, the most common of pediatric malignant brain tumors. It accounts for about 20% of all childhood brain tumors.

Blanco was studying Parkinson's disease as a graduate student at the University of Oviedo in Spain. Then she sought additional training in neurosciences at Columbia University in New York and became a postdoctoral fellow at the University of Miami in Florida, where she studied the role that pathways play in controlling embryonic development in cancer.

Through that research, she became interested in Sonic hedgehog signaling, a pathway not only implicated in controlling embryonic development but also in many cancer types, including brain tumors. As she began to explore more about the role of this signaling pathway in pediatric brain cancers, she realized she wanted to concentrate her efforts in this area and was drawn to the neuro-oncology program at MUSC Darby Children's Research Institute and Hollings Cancer Center. She came to MUSC in January as an assistant professor, studying pediatric brain tumors.

Blanco said she's grateful for the Rally Foundation grant. Each year in the United States, between 250 and 500 children are found to have medulloblastoma. Blanco hopes her research will lead to treatments that can save the lives of these children.

Survival rates in children with medulloblastoma depend on the patient's age and how much the tumor spreads, and children younger than the age of three often have lower survival rates because their disease tends to be more aggressive, she explained.

Although most children with medulloblastoma are cured of their disease, those tumors classified as the Sonic hedgehog subgroup harboring mutations in P53, a tumor suppressor gene, tend to be particularly deadly. This tumor is resistant to the current standard of care, and most of the treatments are in clinical trials. Blanco is particularly focused on targeting the stem cell reservoir of these tumors, as these cells are likely behind chemotherapy resistance and tumor relapse.

With this Rally Foundation grant, Blanco will further explore how the developmental pathway Sonic hedgehog gets activated in patients with mutations in the tumor suppressor P53 in medulloblastoma and further explore the drivers of the stem cells of these tumors. Her hope is that it might lead to targets for new drug treatments and be a catalyst for the development of new treatments for children diagnosed with this particular subtype.

Blanco said it is so meaningful to meet the families that are affected by this disease. This commits her even more strongly to her mission of helping children. "My focus is on saving kids. The word 'cancer' is always scary, but when talking about pediatric cancer, it is a different story. The way the families are affected by pediatric cancer leaves me wordless," she said.

Blanco explained that we need to find better treatments so that survival can go up to 100%.

"We also have to make sure new treatments are not going to be that harsh on them," she said. "We are working on that -- targeted therapeutics should be the future for pediatric cancer patients. If my research can help just one kid, then it will be worth it to me. If I am able to develop a drug that is able to make a difference for one kid and family, it will be worth it." 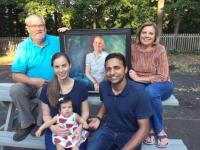