Human impacts on the Lower Lakes of the Murray River estuary have made its ecosystem more vulnerable to drought, according to findings by University of Sydney geoscientists.

The new science shows that since the construction of the Goolwa Barrages in 1940, which effectively cut the estuarine ecosystem off from the ocean, the risk of acidification of its waters has increased.

Researchers led by Dr Thomas Job from the School of Geosciences said their findings need to be taken into account when setting environmental baselines for the management of the Murray estuary. Their work is published in The Holocene journal.

Without ocean water entering the system during drought, as would have occurred before the Goolwa Barrages were built, lake levels can drop to low levels, causing major acidification.

"This isn't just an estimate," lead author on the paper Dr Job said. "We have seen direct evidence for this in the recent geological record going back thousands of years: droughts leave historic fingerprints deep in the lake sediments. We see these fingerprints more distinctly in sediments deposited after the barrages were built."

Increased acidity dissolves metals from soils into the lake waters, lowering water quality. Eventually, these metals end up back in the lake sediments.

"We looked at the geologic record for these metals. Combining these new data with our understanding of the shape of the lake system over time, we have created a more dynamic picture of how the system formed and how it responds to changes in climate," Dr Job said.

"We hope this information will improve management of the Murray-Darling estuary."

Rather than looking to precolonial conditions, current baselines used by the Murray-Darling Basin Authority aim to conserve the system with reference to 1985, when the estuary was listed as a Wetland of International Importance under the Ramsar Convention.

Critically, this is after changes to the ecosystem that locked in its vulnerability to acidification during drought.

"When we look at the complexity of the Albert and Alexandrina lakes, it's important that baselines capture they system's natural conditions. Previous models have struggled to identify how the system has changed over time," Dr Job said.

Contested interpretations of the estuary's formation and uncertainty surrounding the sustainability of current water usage practice for farming and domestic use mean that a robust understanding of how the system has evolved is required.

"Half of Australia's farming - and two-thirds of its irrigated agriculture - relies on careful management of the Murray-Darling system," Dr Job said.

By combining environmental chemistry with studies of the system's geomorphology, Dr Job and colleagues found previously hidden complexity and dynamism in how the lakes formed.

"It's not clear yet what this means for how we manage the precious water resources of our greatest river system, but we are getting a much better understanding of how complex - and how sensitive to change - the Murray estuary is," Dr Job said.

The new model also shows that before about 5400 years ago, Lake Albert experienced very different conditions, due to higher sea levels and a more direct southern connection to the ocean, increasing tidal influences and inflows of saltwater.

"We have updated two previous studies, one published in 1994 and the other in 2007," Dr Job said. "Ours is the first to incorporate the historic environmental chemistry of the lakes."

The research team hopes the improved historic picture of Murray estuary can be applied to the environmental management of the system.

The researchers say that the ecological health and function of Lake Albert, and the degree to which it has been altered, should be measured with reference to its natural estuarine state before the Goolwa Barrages cut the lakes off from tidal brackish waters and changed the system's hydrology.

DOWNLOAD photos of Dr Thomas Job at Lake Albert and the paper at this link.

Carbon and lead dating were funded with support from the Australian government at the Centre for Accelerator Science at ANSTO, the Australian Nuclear Science and Technology Organisation, through the National Collaborative Research Infrastructure Strategy (NCRIS). The South Australia Department of Environment, Water and Natural Resources authorised the undertaking of this research within the River Murray Estuary.

We particularly acknowledge the Ngarrindjeri community for whom this land is of deep cultural and spiritual significance.

Human activity has made Murray estuary more vulnerable to drought

Journal
The Holocene
Funder
Carbon and lead dating were funded with support from the Australian government at the Centre for Accelerator Science at ANSTO, through the National Collaborative Research Infrastructure Strategy, the Australian Nuclear Science and Technology Organisation
DOI
10.1177/0959683620961487 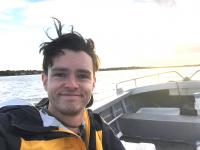