SAN FRANCISCO (March 7, 2012) — Scientists conducting deep-sea research in the Galapagos have described a new species of catshark, Bythaelurus giddingsi, in the March 5 issue of the journal Zootaxa. The new shark is approximately a foot long and has a chocolate-brown coloration with pale, irregularly distributed spots on its body. The spotted patterns appear to be unique to each individual. John McCosker of the California Academy of Sciences collected the first specimens of this new catshark while diving to depths of 1,400 - 1,900 feet aboard the Johnson Sea-Link submersible.

"The discovery of a new shark species is always interesting, particularly at this time when sharks are facing such incredible human pressure," said McCosker, Chair of Aquatic Biology at the Academy and lead author on the paper. "Many species have become locally rare and others verge on extinction due to their capture for shark-fin soup. The damage to food webs is dramatic, since sharks provide valuable ecological services as top-level predators—when they disappear, their niche is often filled by other species that further imbalance ecosystems. Most deepwater shark species are not very susceptible to overfishing; however, since this catshark's range is restricted to the Galapagos, its population is likely limited in size, making it more susceptible than more widely distributed species."

The California Academy of Sciences sent its first scientific expedition to the Galapagos Islands in 1905 and has since organized dozens of return trips. As a result, the Academy is now home to the world's most comprehensive collection of scientific specimens from these famous islands. Most Academy field work in the Galapagos today focuses on the marine environment, where dozens of new species have been discovered in recent decades. In the 1990s, McCosker made a series of dives inside the submersible Johnson Sea-Link to explore the marine life on the islands' steep volcanic slopes and sandy bottoms. Submersibles allow scientists to explore a vast part of the Galapagos that was not accessible to Charles Darwin or earlier Academy scientists. It was during two such dives in 1995 and 1998 that McCosker collected the seven specimens used to describe B. giddingsi. Using research collections at the Academy and elsewhere as a basis for comparison, Academy Research Associate Douglas Long and Smithsonian Institution scientist Carole Baldwin worked with McCosker to confirm that the specimens did indeed represent a new species.

McCosker's marine research in the Galapagos was the subject of a 1996 Discovery Channel documentary called Galapagos: Beyond Darwin. The new shark is named in honor of award-winning filmmaker Al Giddings, who filmed and produced the Discovery Channel project and many other natural history films. McCosker's deep-sea research in the Galapagos is also highlighted within the Academy's Islands of Evolution exhibit, which opened in 2008.

About the California Academy of Sciences

The Academy is an international center for scientific education and research and is at the forefront of efforts to understand and protect the diversity of Earth's living things. The Academy has a staff of over 50 professional educators and Ph.D.-level scientists, supported by more than 100 Research and Field Associates and over 300 Fellows. It conducts research in 12 scientific fields: anthropology, aquatic biology, botany, comparative genomics, entomology, geology, herpetology, ichthyology, invertebrate zoology, mammalogy, microbiology, and ornithology. Visit research.calacademy.org.

New species of deep-sea catshark described from the Galapagos 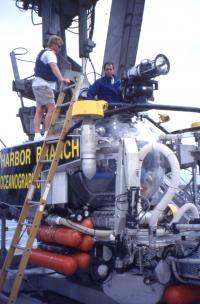