Building upon several years of research into the gecko's uncanny ability to climb sheer walls, researchers at the University of California, Berkeley, have developed an adhesive that is the first to master the easy attach and easy release of the reptile's padded feet. The material could prove useful for a range of products, from climbing equipment to medical devices.

Unlike duct tape or glue, the new material is crafted from millions of tiny, hard, plastic fibers that establish grip; a mere square two centimeters on a side can support 400 grams (close to a pound). While tape sticks when it presses onto a surface, the new adhesive sticks as it slides on a surface and releases as it lifts -- this is the trick behind a gecko's speedy vertical escapes.

The new study appeared online Jan. 23, 2008, in the Journal of the Royal Society Interface.

There are other synthetic adhesives inspired by gecko feet and they adhere much like conventional tape. In contrast, the new adhesive brushes along a surface to develop traction. While ideal for hanging posters, the characteristic is even more important for any application that requires movement, such as climbing.

"The gecko has a very sophisticated hierarchical structure of compliant toes, microfibers, nanofibers and nanoattachment plates that allows the foot to attach and release with very little effort," said co-author and Berkeley professor Ron Fearing, "The gecko makes it look simple, but the animal needs to control the directions it is moving its toes--correct movement equates to little effort," he said.

The new material is also novel in that it gets stronger with use. In experiments, it tightened its hold as it was rubbed repeatedly against a glass plate. The extra strength is caused by the fibers bending over to make more contact, yet once released, the fibers returned to their original shape. The research team is exploring ways to permanently bend the fibers so that the grip strength is its strongest from the outset, no massaging required.

According to Fearing, the new material is the first to mimic the nature of the gecko's characteristic "non-sticky by default" feet. The Berkeley researchers, all engineers, have worked closely with biologists Robert Full, also at Berkeley, and Kellar Autumn of Lewis and Clark College in Portland, Ore., to uncover the key natural properties behind that unique foot, the secret to high mobility on sheer surfaces.

Fearing and his colleagues are part of an NSF-supported Nanoscale Interdisciplinary Research Team (NIRT) that was specifically tasked in 2003 with developing biologically-inspired synthetic gecko adhesives.

"The results of this project are an impressive example of how teaming engineers with biologists results in a better understanding of the role of 'engineering' in nature," says Lynn Preston, the NSF officer who supported these NIRT researchers, and many other teams of engineers and biologists, through her leadership of NSF's Engineering Research Centers program. "This is a perfect example of how to turn that understanding into products that are as sophisticated as those developed by 'Mother Nature'."

Additional images available with the NSF press release at: http://www.nsf.gov/news/news_images.jsp?cntn_id=111051&org=NSF

Additional details about the research are available at:
Smart Gecko Tape: http://robotics.eecs.berkeley.edu/~ronf/Gecko/interface08.html

A video showing the tape under testing in the laboratory is available at: http://www.nsf.gov/news/longurl.cfm?id=27

The pitter patter of little feet ... climbing straight up a wall 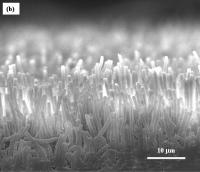 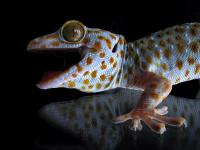