NASA satellites have provided various views of Tropical Storm Saola as it tracks toward Japan in the northwestern Pacific Ocean. The GPM and Suomi NPP satellites found heavy rainfall, towering thunderstorms and a tropical cyclone still being affected by vertical wind shear.

The Global Precipitation Measurement mission or GPM core observatory satellite passed above Tropical Storm Saola on Oct. 24 at 0210 UTC (Oct. 23 at 10:10 p.m. EDT). Tropical Storm Saola was located west of Guam and was moving toward the northwest. Very heavy rainfall was measured by GPM's Microwave Imager (GMI) and Dual-Frequency Precipitation Radar (DPR) instruments in powerful convective storms to the southwest of Saola's center. GPM's radar (DPR Ku band) found that some storms in this cluster were dropping rain at a rate of greater than 252 mm (9.92 inches) per hour.

A 3-D view of Saola using data collected by GPM's radar (DPR Ku band) was created at NASA's Goddard Space Flight Center in Greenbelt, Maryland. The 3-D view of the powerful storms southwest of Paola's center of circulation found that storm tops in a few of these convective storms were reaching heights above 17.5 km (~10.5 miles). The GPM core satellite is jointly managed by NASA and the Japan Aerospace Exploration Agency, JAXA.

Another collaborative satellite, called the Suomi NPP satellite provided a visible picture of the storm. The Visible Infrared Imaging Radiometer Suite (VIIRS) instrument aboard NASA-NOAA's Suomi NPP satellite captured visible imagery of Tropical Storm Saola on Oct. 25 at 12:36 a.m. EDT (0436 UTC). The image showed wind shear was still affecting the system as clouds and storms were still being pushed south of center. The storm still appears elongated as a result of the wind shear from the north.

JTWC predicts that Saola will follow a track similar to deadly typhoon Lan that recently drenched and battered Japan. The JTWC predicts that Saola will attain peak maximum sustained winds of about 80 knots (92 mph) as it approaches southern Japan in about five days. This would make Saola the equivalent of a strong category one hurricane on the Saffir-Simpson hurricane wind scale. 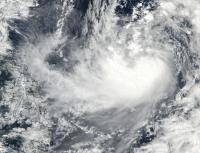