Want to stop HIV infections? Get the immune system to recognize and attack the virus's tell-tale structure.

That's part of the basic approach behind efforts at The Scripps Research Institute (TSRI) to design an AIDS vaccine. This strategy may hinge on finding new ways to stabilize proteins called HIV-1 surface antigens and in designing HIV-like particles to prompt the body to fight the real virus.

"This is a big accomplishment in terms of engineering and design," said TSRI biologist Jiang Zhu.

Zhu co-led the first study with Ian Wilson, Hansen Professor of Structural Biology and chair of the Department of Integrative Structural and Computational Biology at TSRI, and co-led the second with TSRI Associate Professor Andrew Ward.

The findings were published June 28, 2016 in the journal Nature Communications.

In the first publication, Zhu and researcher Leo Kong (a study first author now at the National Institutes of Health) built on previous structural studies from the Ward and Wilson labs to investigate a trait called "metastability." Metastability describes the tense state of the HIV Envelope glycoprotein (Env) trimer when it is poised like a loaded spring to undergo the dramatic changes that allow the virus to enter cells.

Metastability poses a problem for scientists who want to create a precise image of this viral target and see what the human immune system is up against.

Metastability also stands in the way of naturally occurring immunity and vaccine production. For the adaptive immune system to work in either case, it needs to recognize a functional, stable version of a virus's proteins--a sort of mugshot--so it can produce antibodies and attack the actual virus upon encountering it.

Unfortunately, because of the virus's metastability, or shape-shifting tendency, structures of HIV's proteins have proven difficult to establish for use in vaccine design. The Ward and Wilson groups at TSRI have previously determined cryo-EM and x-ray structures for other Env constructs; however, current methods to stabilize Env in one strain of HIV won't necessarily stabilize it in another, making it hard to design an arsenal of Env proteins to help elicit "broadly neutralizing antibodies" that could fight many types of HIV.

To advance the vaccine effort, TSRI researchers wanted to track down the root cause of metastability, and Jiang and Kong hypothesized that altering a key region of Env would improve its overall properties.

They hypothesized that a region of the Env called HR1 could be linked to metastability.

"The HR1 basically resembles a highly bent twig that is ready to spring back straight," said Kong. "This small bend in the HR1 region is likely ground zero for metastability. In most published Env structures, this region appears disordered when mutated or loosely packed when in its native form. From these observations, it seemed reasonable that rewiring the HR1 bend could greatly stabilize Env."

Indeed, when the scientists tweaked HIV's genetic sequence, they were able to shorten the HR1 region, preventing its transformation and keeping the rest of the structure stable.

"We've figured out one of the fundamental reasons why HIV is metastable," said Zhu.

The researchers then demonstrated that their stabilized Env trimers also almost perfectly mimicked the structure of the real HIV trimer, suggesting they could be useful in vaccines. Since rewiring the HR1 should prevent Env undergoing its necessary shape-shifting changes to infect cells, the stabilization strategy also could lead to protein or DNA-based vaccines. Furthermore, the modified trimer also has the potential to be produced in reasonably large quantities and at high purity--important considerations in industrial-scale vaccine production.

Finally, since many viruses contain metastable Env proteins with HR1-like regions, this TSRI-developed engineering approach may be applicable in the design of vaccines against other viral pathogens such as influenza and Ebola virus.

In the second paper, the researchers looked into designing nanoparticles that could mimic HIV.

Particles aren't new in vaccine design. They provide the backbone of successful vaccines against human papillomavirus (HPV), hepatitis B and hepatitis E--"the most efficacious human vaccines ever made," according to Zhu.

These nanoparticles are called virus-like particles (VLPs) and are hollow shells of other proteins found in nature. Scientists have found that they can add viral proteins to the outside of a shell, creating a phony virus. The imposter then prompts the body to produce antibodies for long-term protection against the real virus.

But as Zhu and his colleagues focused on creating HIV-like VLPs, the Env trimer, once again, presented a challenge.

The trimer is made of three subunits that come together to form a base with a crown shape on top. The top of the crown is where the tips of the three subunits meet.

To construct an artificial virus, in the new study the researchers added HIV trimers to nanoparticles that naturally lock their own subunits together in clusters of three. As the three subunits come together, the researchers hypothesized, they could bring the HIV antigens together to form a trimer.

"Our idea was to 'fuse' a trimeric HIV-1 antigen to a nanoparticle subunit, so when the subunits 'self-assemble' they bring three attached HIV-1 antigens together," said TSRI Staff Scientist Linling He, who served as co-first author of the study with Natalia de Val, a researcher at TSRI at the time of the study.

It was a feat of geometry and engineering--and it worked. "It has been really challenging to properly present HIV Env on nanoparticles while keeping its natural trimeric form--but we did it," said Zhu, "Multiple copies of Env are now displayed on the nanoparticle surface, just like what a real virus would do."

The team then tested different nanoparticles and versions of the trimer, including one based on the stabilized Env in the first study, to find the best combinations. Six designs worked well in laboratory tests and now await trials in animal models.

In addition to the authors listed above, authors of the second study, "Presenting native-like trimeric HIV-1 antigens with self-assembling nanoparticles," were Therese C. Thinnes and David Nemazee of TSRI. 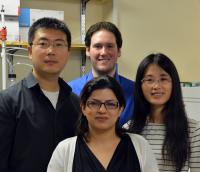