Adult Pacific salmon spend a great portion of their life in the ocean. But their life began along the banks of freshwater streams. Their life will end there, as well. These important steps in the lifecycle of salmon play a role in the health of streambank ecosystems.

David D'Amore and a team of scientists studied how different soils respond to the delivery of "salmon-derived nutrients." These nutrients come from adult salmon returning to their home streams, known as spawning. The study sites were forested ecosystems in Alaska's coastal temperate rainforest.

Aquatic and terrestrial scientists have studied salmon derived nutrients in these systems, but D'Amore set out to see if there was a difference in how these nutrients worked with varying soil types along the streambanks.

"The fate of salmon-derived nutrients will be influenced by the soil type in the riparian zone," says D'Amore. "These soils play an important role in the transfer of material and energy between terrestrial and aquatic environments. The nutrients provided by salmon can support microbial and plant growth. In turn, these organisms support the salmon and other animals that rely on food from the streambank ecosystems."

"Soils along the streams resulted from a series of alluvial deposits after the glaciers retreated," says D'Amore. "Two alluvial deposits were formed during the last ice age, resulting in two different soils. An older terrace formed Spodosols, rich in organic matter. They also have highly enriched organic-metal complexes. But there are also younger floodplain soils with little development. These two soil types offer a stark contrast in attributes such as acidity, cation exchange capacity, and organic matter - all which affect how well nutrients are absorbed and held in soil."

This difference in how the two soil types worked with salmon-derived nutrients added the novel twist for the research done by D'Amore's team.

Salmon begin life along the banks of streams that flow past the alluvial soils of the coastal rainforests. Once the salmon emerge from their egg nests, they are nurtured by the nutrients that support the food web in the stream. There, they are also protected by the woody debris of large conifers that fall into the stream. Once they are large enough to survive in the ocean, the salmon depart the freshwaters to spend 2-4 years in the nutrient-rich waters of the North Pacific. The adult salmon then return to their natal streams from the ocean to close the life cycle loop.

"Our study found that both nitrogen and phosphorus decreased over time, but were retained in the soils and could be available to plants in the riparian zone over the duration of the spawning cycle," says D'Amore. "Although the extractable nitrogen and phosphorus amounts did not differ between soil types, the way the nutrients were processed did. We also found that over time - and location - there were differences in the way these salmon-derived nutrients were used."

The findings in this study revealed the potential for contrasting nutrient cycling pathways between the two soil types. "Future research work will focus on the fate of nitrogen through leaching and denitrification," says D'Amore.

"In addition, we plan to look at nitrogen and phosphorus, along with their physical and biological compartments, to determine the ultimate fate of the salmon-derived nutrients. The link between the nutrient subsidy and increased plant growth needs to be more closely examined, especially in the spatial context of the soils and their different nutrient retention characteristics."

This study was recently published in the Soil Science Society of America Journal. The research was funded by USDA-CREES National Research Initiative (Managed Ecosystems Program 2006-35101-16566). 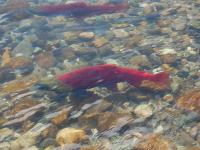 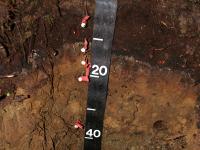