Adenoviruses (Ad) are everywhere, and while they pose limited threat in individuals with healthy immune systems, they cause significant disease burden in immunocompromised patients. A study published on February 11th in PLOS Pathogens reports on a new mechanism by which the virus interferes with the host's ability to detect and eliminate viral intruders.

In the context of Ad infection, a virus protein called E4orf4 is a multifunctional regulator of viral gene expression. When present at high levels on its own, E4orf4 induces cell death, and cancer cells are especially susceptible. Understanding how E4orf4 works is therefore potentially relevant for the control of Ad as well as cancer.

Tamar Kleinberger, from the Technion in Haifa, Israel, and colleagues are interested in the mechanisms by which E4orf4 exerts its functions. In this study they show that the E4orf4 protein, together with its cellular partner, a de-phosphorylating protein called PP2A, influences the activity of the DNA damage response (DDR).

The DDR is a network of cellular pathways that sense, signal, and repair DNA lesions, and put cellular business on hold until the DNA damage is either repaired or the cell is eliminated. This prevents the generation of potentially deleterious mutations. The DDR is also part of the host's defense against viral infection: it recognizes viral DNA as abnormal and inhibits viral replication.

The researchers found that E4orf4 targets two DDR pathways regulated by proteins called ATM and ATR and dampens their activity. Both ATM and ATR are activated by and respond to the presence of abnormal DNA molecules. Intact cellular DNA is normally present in continuous double-stranded form. ATM is activated by breaks in double-stranded DNA, whereas ATR senses persistent single-stranded DNA. In response to the presence of abnormal DNA, both ATM and ATR send signals that prevent a cell from dividing, which makes time for either DNA repair or cell death.

When the researchers examined cells that lacked active ATM or ATR, they found that they provided a more permissive environment for Ad replication. Such cells also allowed efficient propagation of mutant Ad that lacked E4orf4. Because these results suggested that ATM and ATR inhibit Ad propagation and that E4orf4 acts to antagonize their effects, the researchers asked which stages in viral infection are affected by these activities. They found that, at least in the cells they studied, ATM inhibition was important to the early virus life cycle, whereas ATR inhibition impacted mostly late protein expression and progeny virus production.

Since E4orf4 reduced DDR activation and inhibited DNA repair, the researchers compared the effect of drugs that cause DNA damage or stress in regular cells and in cells expressing E4orf4. While regular cells were able to cope with such drugs to some extent, E4orf4 expressing cells were more sensitive and died at lower drug concentrations.

Besides ATM and ATR, Ad is known to target several other parts of the DDR response, suggesting that DDR inhibition is essential for viral propagation. The results also provide a possible explanation for the cancer-specificity of E4orf4-induced cell death: Many cancers have DDR deficiencies leading to increased reliance on the remaining intact DDR pathways and to enhanced susceptibility to DDR inhibitors such as E4orf4.

The authors conclude that "E4orf4 employs a novel mechanism to inhibit the DDR, which improves Ad replication and may contribute to induction of cancer-specific cell death by the viral protein. Investigation of this novel mechanism may provide a better understanding of critical DDR nodes that are targeted by E4orf4 and are required for successful application of a combinatorial treatment of cancer."

Please use this URL to provide readers access to the paper (Link goes live upon article publication): http://dx.plos.org/10.1371/journal.ppat.1005420

Funding: This work was supported by the Binational Science Foundation US-Israel, grant number 2013140 to TK, http://www.bsf.org.il; the Israel Cancer Association grant number 20150008 to TK, with the generous assistance of the ICA Switzerland friends, http://en.cancer.org.il/template_e/default.aspx?PageId=7606; and the Israel Science Foundation grant number 399/11 to TK, http://www.isf.org.il/english/default.asp. The funders had no role in study design, data collection and analysis, decision to publish, or preparation of the manuscript. 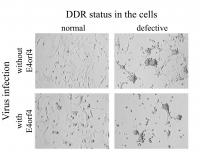