These discoveries were published in Research in Astronomy and Astrophysics.

Pulsars are compact remnants of the death of bright, massive stars. They have the strongest magnetic field, highest density and fastest rotation of any celestial body in the Universe, and show significant relativistic effects in systems of binary compact stars.

Since the first pulsars were discovered in 1968, about 3,000 pulsars have been found in total. Among them, about 400 have a period less than 30 milliseconds and are very stable in rotation.

Prof. HAN and his team designed a snapshot survey strategy so that a small patch of sky can be stared for five minutes by FAST and can be fully covered in 21 minutes. This survey is known as the Galactic Plane Pulsar Snapshot (GPPS). The entire visible sky near the Milky Way will be completely hunted for pulsars in the next five years.

This is the first sensitive search for weak pulsars down to the microJy level and has been selected as one of FAST's five key science projects. Such a survey can detect pulsars with a flux density down to 5 microJy, about a magnitude weaker than previous surveys by other radio telescopes over the world.

Up to now, GPPS has searched about 5% of the planed sky and has discovered 201 pulsars. "At this early stage of the project, this is an impressive total," said Prof. R.N. Manchester of CSIRO Astronomy and Space Science, Australia.

Among the newly discovered pulsars, some have strange pulse dispersion properties. Dispersion is the measure of total electron density along the path from a pulsar to Earth and is a good indicator of pulsar distance. The higher the dispersion measure, the greater the distance. GPPS has uncovered pulsars with very high dispersion measures that challenge the best current models of electron density distribution in the Milky Way.

About 40 pulsars found in the survey have a period less than 30 milliseconds, making them newly discovered MSPs. "The GPPS survey has already increased the number of known MSPs by nearly 10 percent, a remarkable achievement," said Prof. Manchester. Among them, 14 have a companion around, so do the two long-period pulsars. "No doubt some of these will turn out to be excellent probes of gravitational theories," he added.

In addition, GPPS has discovered many pulsars with special features. For example, some produce emissions that switch on and off or emit just a few pulses over many minutes. In addition, for many previously known pulsars, the FAST survey has obtained data with extremely high signal-to-noise ratio, which has improved the parameters for 64 pulsars.

"FAST has the promise for the study of compact objects in the universe, and helps us learn more about the fundamental physics and astrophysics," said Prof. Jim Cordes from Cornell University, a reviewer of the study.

This project is supported by the National Natural Science Foundation of China.

Research in Astronomy and Astrophysics 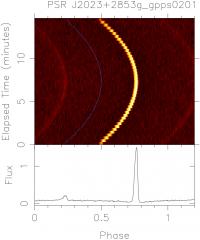 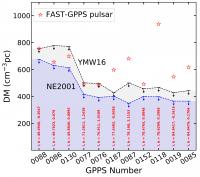