The findings are reported in Proceedings of the Royal Society B in a paper by Humboldt post-doctoral fellow, Dr. Aneesh Bose; bachelor students of the University of Konstanz, Johannes Windorfer and Alex Boehm; and Dr Alex Jordan, Principal Investigator in the Max Planck Institute of Animal Behavior and the DFG Cluster of Excellence "Centre for the Advanced Study of Collective Behaviour" at the University of Konstanz. The study also included co-authors from the University of Basel.

The problem with studying shelter selection in the wild is that many traits in nature are linked. A bigger shelter (for example a burrow, den, hole, or shell), could be better for rearing off-spring, while a bigger shelter entrance opens the way for more predators to enter. However, bigger shelters often have bigger entranceways, and many animals are unable to physically alter the structures they encounter and choose amongst in the wild. Therefore, pinpointing the function behind an animal's preferences for shelter structures requires circumventing the constraints of the natural world where traits are often correlated.

- Biologists from the University of Konstanz and Max Planck Institute of Animal Behavior in Konstanz develop a paradigm using CT-scanning, 3D-modelling and 3D-printing to examine how animals choose between complex alternatives.

- A shell-dwelling cichlid fish (Neolamprologus multifasciatus) from Lake Tanganyika, Africa, were given artificial shells to choose from in experiments.

- Alex Jordan and Aneesh Bose are part of the University of Konstanz?s Cluster of Excellence "Centre for the Advanced Study of Collective Behaviour", which has been funded in the Excellence Strategy of the German Federal and State Governments since 2019. 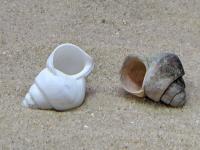