It's one of the iconic images of early Antarctic exploration: the heroic explorer sledging across the icy wastes towed by his trusty team of canine companions.

In a paper just published in Polar Record, researchers from Canterbury Museum, Lincoln University and University of Otago in New Zealand analysed the history and contents of Spratt's dog cakes, the chow of choice for the canine members of early Antarctic expeditions.

Lead author, Canterbury Museum Curator Human History Dr Jill Haley, has researched the lives of dogs in Antarctica and curated the Museum's 2018 exhibition Dogs in Antarctica: Tales from the Pack.

"The early explorers valued their dogs, not just for pulling sledges but for their companionship in the bleak isolation of Antarctica," she says.

"Our analysis of a partially crumbled Spratt's dog cake, one of four cared for by Canterbury Museum, found that the contents of the cakes weren't that different to modern dog biscuits. However, the quantity dogs were fed on the expeditions didn't provide enough fuel for their high-energy activities."

Pet food was a relatively new invention in the early twentieth century and seen as superior to older practices of feeding dogs table scraps or letting them scavenge for themselves.

Early polar explorers were particularly keen on Spratt's dog cakes because they were easy to transport, took no effort to prepare and did not perish.

The cakes were used on two Arctic polar expeditions before they were taken south by Captain Robert Falcon Scott's Discovery expedition (1901-1904). The expedition's 18 sledge dogs were fed the biscuits alongside dried fish from Norway; all the animals died after consuming rancid fish on a sledging expedition.

Perhaps wanting to avoid a repeat of this episode, the handlers on Scott's Terra Nova expedition (1910-1913) fed the animals on Spratt's alone. On rations of 0.3 kg of biscuits each per day the dogs became desperately hungry, even eating their own excrement. They recovered when seal meat was added to their diet.

Ernest Shackleton took Spratt's on his Nimrod (1907-1909) and Endurance (1914-1917) expeditions, where they were part of a doggy diet that also included seal meat, blubber, biscuits and pemmican, a high-energy mix of fat and protein.

University of Otago researchers Professor Keith Gordon, Dr Sara Fraser-Miller and Jeremy Rooney used laser-based analysis to determine the composition of the materials in the cake down to micron resolution, identifying a number of constituents including wheat, oats and bone.

Lincoln University Associate Professor of Animal Science Dr Craig Bunt compared the cakes with similar foods, including modern dog food, and calculated how many kilojoules of energy each biscuit would have provided.

To match the energy intake needed by modern sledge dogs, the dogs on the early Antarctic expeditions would have needed to eat between 2.6 and 3.2 kg of Spratt's dog cakes a day.

However, historic accounts suggest daily dog rations on some expeditions were only around 0.5 kg of biscuits and were sometimes as low as 0.3 kg.

The researchers concluded that Spratt's dog cakes were probably a suitable complete food for dogs in Antarctica; dogs on the early expeditions just weren't fed enough of them. 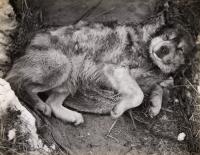 Stareek, a dog on the Terra Nova expedition