ORLANDO, Fla., February 6, 2012 – Taste receptors on the tongue help us distinguish between safe food and food that's spoiled or toxic. But taste receptors are now being found in other organs, too. In a study published online the week of February 6 by the Proceedings of the National Academy of Sciences of the USA, researchers at Sanford-Burnham Medical Research Institute (Sanford-Burnham) discovered that beta cells in the pancreas use taste receptors to sense fructose, a type of sugar. According to the study, the beta cells respond to fructose by secreting insulin, a hormone that regulates the body's response to dietary sugar.

"Before this study, fructose's effect on insulin release was not appreciated. Fructose, and especially high-fructose corn syrup, is found in everything from sodas to cereals, but it remains to be seen whether dietary fructose is good or bad for beta cells and human metabolism," said Björn Tyrberg, Ph.D., adjunct assistant professor in the Diabetes and Obesity Research Center at Sanford-Burnham's Lake Nona campus in Orlando and senior author of the study.

After a meal, beta cells in the pancreas typically respond to the suddenly high levels of glucose, another type of sugar, in the blood by releasing insulin. Insulin then binds to receptors present on many cells in the body. Like a key unlocking a door, insulin binding allows glucose to enter the cell and be used for energy. But most meals are a mix of different types of sugar. This study shows that glucose is not the only sugar that triggers insulin secretion—fructose also plays a role.

"These findings are interesting because we know that insulin affects blood glucose levels, indicating that these newly identified beta cell taste receptors might play a role in metabolic diseases such as obesity and diabetes," said Kyriazis, first author of the study. "We're now trying to understand how beta cell taste receptors are regulated and how their expression might differ between healthy and disease states. We're also now designing human studies to substantiate what we've found in mice."

Björn Tyrberg, adjunct assistant professor at Sanford-Burnham and senior author of this paper, earned his Ph.D. from Uppsala University, Sweden. He has studied beta cells since the early 1990s in Sweden and later in the U.S. at the University of California, San Diego and Sanford-Burnham.

George Kyraizis, postdoctoral fellow and first author, earned his Ph.D. from the University of Central Florida in Orlando and is originally from Greece.

Mangala Soundarapandian, postdoctoral fellow, earned a Ph.D. from the University of Central Florida in Orlando and is originally from India.

Sanford-Burnham Medical Research Institute is dedicated to discovering the fundamental molecular causes of disease and devising the innovative therapies of tomorrow. The Institute consistently ranks among the top five organizations worldwide for its scientific impact in the fields of biology and biochemistry (defined by citations per publication) and currently ranks third in the nation in NIH funding among all laboratory-based research institutes. Sanford-Burnham is a highly innovative organization, currently ranking second nationally among all organizations in capital efficiency of generating patents, defined by the number of patents issued per grant dollars awarded, according to government statistics.

Sanford-Burnham utilizes a unique, collaborative approach to medical research and has established major research programs in cancer, neurodegeneration, diabetes, and infectious, inflammatory, and childhood diseases. The Institute is especially known for its world-class capabilities in stem cell research and drug discovery technologies. Sanford-Burnham is a U.S.-based, non-profit public benefit corporation, with operations in San Diego (La Jolla), Santa Barbara, and Orlando (Lake Nona). For more information, please visit our website (http://www.sanfordburnham.org) or blog (http://beaker.sanfordburnham.org). You can also receive updates by following us on Facebook and Twitter.

Tasting fructose with the pancreas 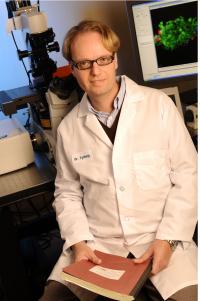