A study explores the origin of boulders deposited on cliffs in western Ireland and New Zealand's North Island. The question of whether tsunamis or storm waves are responsible for the presence of boulders on ocean cliffs remains unsettled. John Dewey and Paul Ryan compared two deposits of boulders weighing more than 30 tonnes on the coastline of Annagh Head, western Ireland and on the Matheson Formation, a Miocene deposit in New Zealand. Oceanographic data, field measurements, and historic storm accounts indicated that Annagh Head deposits, which weigh more than 50 tonnes, are subject to 20-30-meter-high storm waves. Field measurements of the Matheson Formation indicated that a 12-13-meter tsunami with a period of approximately 1 hour could have deposited the boulders, some of which weigh more than 140 tonnes. Further, compared with the Annagh Head deposits, the Matheson Formation deposits are spread over a large geographic region and include a large proportion of ocean floor sediments--both of which are indicative of a tsunami. A numerical model of storm waves indicated that boulder size, shape, and density determine the site at which waves deposit boulders. According to the authors, the Matheson Formation likely represents the deposition of a single tsunami over 1 hour, whereas the Annagh Head deposits likely represent the result of centuries of storms.

Boulder deposition by tsunamis and storms 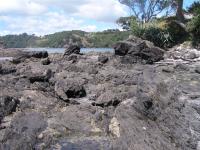