Researchers at the University of Toronto examined fungi in the mucus of patients with cystic fibrosis and discovered how one particularly cunning fungal species has evolved to defend itself against neighbouring bacteria.

A regular resident of our microbiome - and especially ubiquitous in the lungs of cystic fibrosis patients -the Candida albicans fungus is an "opportunistic pathogen." This means it usually leaves us alone, but can turn against us if our immune system becomes compromised. In fact, this fungus is among the most common causes of bloodstream infections, such as sepsis. As the population living with weakened immune systems has risen substantially over the past two decades - people living with HIV, having organ transplants or undergoing cancer chemotherapy are some examples - opportunistic fungal pathogens like this one have become an even greater threat. This is especially alarming considering we don't have any surefire anti-fungal drug to stop them.

"Fungi have a staggering impact on human health, infecting billions of people around the world and killing 1.5 million every year - that's in the range of tuberculosis and malaria," says Leah Cowen, lead researcher on the study, University of Toronto Molecular Genetics professor and Canada Research Chair in Microbial Genomics and Infectious Disease. "And yet, they are underappreciated and not well understood."

Candida albicans is a particularly wily fungus. Its signature maneuver is shapeshifting - it can morph from a round, single-celled yeast into a long stringy structure, allowing it to adapt to different environments and making it exceptionally harmful. For this study, researchers analyzed 89 mucus samples from 28 cystic fibrosis patients, using both high-throughput genetic sequencing as well as culture-based analysis. Candida albicans was predictably prevalent.

What surprised the researchers, however, was that some of this fungi began shifting into its stringy shape without any environmental cue - usually this transformation (called filamentation) doesn't happen spontaneously, but is triggered by the presence of certain substances, such as blood. To see if there could be a genetic explanation, the researchers sequenced the genomes of these samples and found a common denominator. All but one had genetic mutations in a gene known to repress the change shape - called NRG1.

"This was a smoking gun," says Cowen. "This gene makes a protein that stops filamentation - like a brake. Because of these genetic mutations, the fungi lost this brake and were not able to stop these long strings from forming."

To find out why certain strains of this fungus would have developed this genetic variation, researchers looked to neighbouring bacteria. As part of an ongoing battle between microbes, certain bacteria, which are also found in cystic fibrosis patients, secrete molecules preventing the fungus from changing into its stringy shape. The researchers tried exposing the mutated fungus to these bacterial rivals. Instead of responding to the bacterial signals, the fungus kept to its stringy form. The researchers believe these fungi have evolved to counter the tactics of their bacterial rivals.

"We think the interaction between bacteria and fungus drove this," says Cowen. "Usually losing control isn't a very good thing, but in this case it may be a great defense mechanism for Candida. These fungi have essentially learned to ignore the bacteria."

This study was published today in the journal PLOS Pathogens. It was part of a large interdisciplinary Canadian Institutes of Health Research grant, involving researchers across disciplines - clinicians, molecular biologists, evolutionary biologists and bioinformaticians collaborated on a variety of microbiome-focused studies.

Cowen is continuing research into the impact of fungal pathogens in cystic fibrosis patients, who are unable to clear microbes from their airways and suffer reduced lung function as a result. We still have no cure for this fatal genetic disease. She is also seeking to better understand the role of fungi in variety of other conditions. 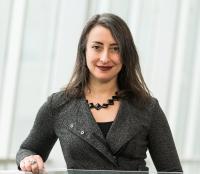