Ten years ago, researchers at Aarhus University, Denmark, reported the discovery of centimeter-long cable bacteria, that live by conducting an electric current from one end to the other. Now the researchers document that a few cells operate with extremely high oxygen consumption while the rest of the cells process food and grow without oxygen. An outstanding way of life.

We humans need food and oxygen to live.

Now, imagine if oxygen was to be found only at the mountain top and food only in the valley. That's how the world looks like for cable bacteria, which live in the bottom of seas and lakes. For them, oxygen is available only at the very surface of the bottom, whereas the food is buried centimeters down.

"While other organisms try to solve the problem by moving oxygen and food up and down, cable bacteria have developed electric wires. When consuming food they produce electrons and send them through the 'biowires' to the surface for reduction of oxygen from the overlying water," says Lars Peter Nielsen, head of Center for Electromicrobiology, Aarhus University, Denmark.

A cable bacterium consists of many cells in line. It can grow centimeters long, the cells encased in a common coat wherein the wires stretch.

The researchers placed cable bacteria in a little, transparent chamber. In the middle, the bacteria had access to oxygen-free mud stuffed with food, while oxygen diffused in from the edges. Right where the intruding oxygen was depleted, numerous unicellular bacteria formed a distinct front. In that specific position they fought to capture food and oxygen from either side simultaneously.

"In the microscop, I watched how single cable bacteria placed themselves across the front with one end into the zone with oxygen," explains Stefano Scilipoti, PhD-student at Center for Electromicrobiology, Aarhus University and the primary discoverer.

Less than 10% of the cells are "breathing"

"Less than 10% of the cells of the cable bacterium consumed oxygen but they did it with a rate matching the highest rates known in biology. That only works because the cable bacterium runs an electric current between the cells being in contact with oxygen and the cells processing the food. The cells consuming oxygen can thus focus on this task only, while the other cells digest food and generate new cells," says Stefano Scilipoti.

The ancestors of cable bacteria lived without any oxygen. Anaerobic bacteria, as you call them. For these bacteria, oxygen is toxic and a prolonged exposure eventually lead them to death. With the evolution of electric connection to oxygen however, cable bacteria can explore the strength of breathing with oxygen without exposing many cells to oxygen stress, thus getting the best of oxygen (more energy) and avoiding the rest (damage to the cells).

At Center for Electromicrobiology, the chase to unravel the special mechanisms that enable this unique electric form of life continues. 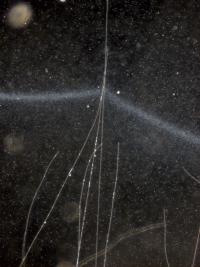