Gulls are one of the main wild birds that act as reservoirs of Campylobacter and Salmonella, two most relevant intestinal antibiotic-resistant bacteria causing gastroenteritis in humans. Therefore, according to an article published in the journal Science of the Total Environment seagulls could act as sentinels of the antibiotic pressure in the environment.

The study was carried out by experts of the Faculty of Biology and the Biodiversity Research Institute (IRBio) of the University of Barcelona, and the Institute of Agrifood Research and Technology (IRTA).

Resistant bacteria to antibiotics represent a serious problem for human health and other species since they can harden the treatment of bacterial infections. According to the experts, wildlife fauna is a reservoir of resistant and multiresistant strains of bacteria and in particular, some animals -for instance, birds- have a great ability to spread these around the environment with their local and migratory movements.

Researchers analyzed nine colonies of two colonies of Southern Europe gulls, the yellow legged gull (Larus michahellis), and audouin's gull (Larus audouinii), an endemic species of the Mediterranean. All colonies featured bacteria from the Campylobacter and Salmonella genera, including resistant strains to antibiotics. "These bacteria are the main cause of gastroenteritis in humans. Largely, we isolated the Campylobacter jejuni species, as well as some Salmonella serotypes common in human salmonellosis outbreaks, such as Salmonella Typhimurium", notes Marta Cerdà, researcher at IRTA's Animal Health Research Centre (CReSA).

In many industrialized countries, the main source of infection regarding these pathogens in humans is the consumption and handling of contaminated food from bird origins (specially meat and eggs). However, apart from these production animals, wild fauna plays a relevant role in the epidemiology of these bacterial infections. "Gulls are getting more used to find food in urban areas or landfills, where they find many leftovers. Therefore, these are likely to get infected by human-origin bacteria", notes professor Jacob González-Solís Bou, head of the Group on Seabird Ecology and member of the Department of Evolutionary Biology, Ecology and Environmental Sciences and the Biodiversity Research Institute (IRBio) of the UB.

Moreover, gulls spread these bacteria around different parts of the territory with their local and migratory movements, favouring these resistant bacteria to move around the environment permanently. In general, these bacteria are not dangerous to gulls nor the wildlife, although certain salmonellosis outbreaks that caused the death of bird colonies (in the United States) have been detected.

"It is crucial to study the presence of resistent bacteria in wild fauna considering a one health approach, mainly in these cases of pathogens that can affect both animals and people", conclude the experts.

Gulls, sentinels of bacteria in the environment 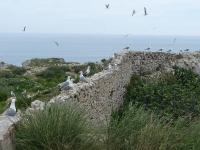