Extensive loss of branching corals and changes in coral community structure in Australia's Palm Islands region over the past century has been revealed in a new study.

Dr Tara Clark of The University of Queensland Radiogenic Isotope Facility in the School of Earth and Environmental Sciences said these corals were highly sensitive to environmental change.

She said the area in the central region of the Great Barrier Reef warranted close monitoring to avoid irreversible changes in ecosystem health.

"Hard coral cover on the Great Barrier Reef is on a trajectory of decline," Dr Clark said.

"Yet, little is known about past coral mortality before long-term monitoring began around the 1980s to give us a long-term picture of what has happened since European colonisation of the coast."

Dr Clark said the limited baseline information of ecological dynamics before the 1980s made it difficult to understand recent ecosystem trends.

"Our study demonstrates the use of high-resolution uranium-thorium dating, modern and palaeoecological techniques to improve our understanding of coral mortality and recovery dynamics over much broader time scales," she said.

Dr Clark said the study found the timing of Acropora coral death to have occurred simultaneously among reefs in the Palm Islands, coinciding with major disturbance events, such as bleaching and flooding, in the 1920s to 1960s and again in the 1980s to 1990s.

"Surveys conducted in 2014 revealed low Acropora cover - less than five per cent - across all sites, with very little evidence of recovery for up to 60 years at some sites, thus there was little left in this region for the 2016 bleaching event to kill." she said.

Together with previous research, the indication was the recent condition of the inshore Great Barrier Reef was a "shifted baseline" - already degraded before long-term monitoring took place. Taking together all such previous undocumented loss, the true picture is probably far worse than that depicted in previous reports of the 2016 mortality event.

This in turn strongly supported the importance of robust management action to reduce human impacts on reefs, especially efforts to reduce sediment and nutrient delivery to reef waters, in order to buy time for the reefs to recover before the next major disturbance event.

"The findings of this study will also prove valuable to reef managers by providing a reliable baseline for ongoing monitoring and identifying reefs at risk for deterioration, especially for those where modern observations are lacking," Dr Clark said.

"Most of the work was done during her PhD studies or as part of a National Environmental Research Program project when she was a postdoctoral fellow," Professor Zhao said.

"This paper, together with two other papers published in Scientific Reports and Nature Communications in the past year, were published when Tara relied on casual administration and technical roles for a living, so this work is really an amazing achievement."

The study involved researchers from UQ's School of Biological Sciences,

Australian Institute of Marine Science, and the ARC Centre of Excellence for Coral Reef Studies, and was published in Proceedings of the National Academy of Sciences of the United States of America (PNAS) (doi:10.1073/pnas.1705351114). 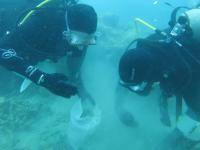 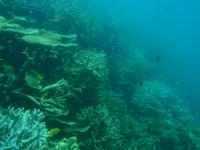