Peripheral parts of the Amazon forest were long thought to be most vulnerable to climate-induced collapse. Now, a study by an international team of scientists reveals in the scientific journal PNAS that seasonally inundated areas in the heart of the forest may be an unexpected Achilles' heel. Those floodplains turn out to be particularly prone to fire which may subsequently spread into the surrounding forest.

The team made the discovery by combining satellite and field datafor the entire basin, with information on more than 250 forest fires, to compare how forest resilience varies between floodable and non-floodable areas, and in relation to climatic variables. Analyzing the distribution of trees across the basin, they found that fire-related savannas can dominate the flooded parts already when rainfall drops below 1500 mm/year, whereas in other parts rainfall as low as 1000 mm/year can be tolerated.

"Our findings suggest that if the Amazonian climate becomes drier, forests will probably collapse first in the seasonally in undated areas", says the lead author Bernardo M. Flores, and a former PhD candidate at Brazil's Federal University of Rio Grande do Norte (UFRN) and Wageningen University & Research in the Netherlands.

The authors also measured forest recovery rates after the 1997 and 2005 mega-fires as an indication of resilience. They found that fire impact on forest structure and soil fertility was higher and more persistent in the floodplains. "The lower capacity of floodplain forests to recover suggests that these areas can be trapped by recurrent fires in an open vegetation state more easily than the uplands", says Milena Holmgren of Wageningen University & Research and a coauthor of the study.

The authors intend to continue studying the mechanisms that may lead to savanna expansion in Amazonian ecosystems. "An important question at this point is if these burnt forests will indeed turn into savanna, yet this will depend on the plant species that colonize disturbed sites," says Flores.

The new results have implications not only for forest conservation and local societies. The loss of floodplain forests would result in massive carbon emissions from the trees, soil, and peatlands recently discovered in the central and western Amazonia.

The study paves the way for new management actions that, if incorporated by Amazonian countries into their environmental policies, would help preserve the Amazon forest in the future. "If Amazonian societies want to increase the resilience of the forest, they might consider developing fire management plans with a special attention to these seasonally inundated areas", says Flores. 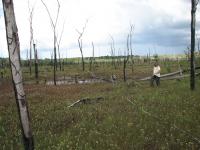