CALGARY, ALBERTA (August, 2017) -Animals that live on islands are among the most at risk from extinction. A remarkable eighty percent of extinctions occurring since 1500AD have been on islands, with inhabitants facing dangers from climate change, sea level rise, invasive species, and human interactions. However, new research presented this week at the Society of Vertebrate Paleontology conference in Alberta, Canada, suggests that one island mammal may hold the key to survival -- a flexible diet.

Alexis Mychajliw, a PhD student at Stanford University mentored by Dr. Elizabeth Hadly, is using the Caribbean islands as a living experiment to understand factors driving the extinction of mammals. Since before the time of Columbus, humans have been altering the environments of the Caribbean. Mychajliw wanted to know how the native species responded, which survived and why. She explains "The Caribbean is now full of introduced mammals -- cows, pigs, rats, dogs -- that look nothing like the original fauna. Are they doing similar things ecologically, or have we created an entirely different dynamic? And where do the remaining native mammals fit in this new ecosystem?"

As part of an international team, Mychajliw gathered data on fossil mammal species and ancient human populations coexisting in the Caribbean for 7000 years. She correlated changes in size and diversity of Caribbean mammals over time with human population growth and climate change. She discovered that there have been extinctions on the Caribbean islands associated with arrival of both indigenous and European human populations, wiping out many of the smallest and largest species. "By piecing together the radiocarbon record, our analysis makes it clear that people had a hand in Caribbean extinctions -- both before and after Columbus' arrival", says collaborator Dr. Siobhan Cooke. However, one mammal has persisted throughout, the enigmatic Solenodon.

These bizarre mammals resemble giant venomous shrews. "Looking at solenodons today, you might think of them as a strange relictual creature that, like many ancient lineages, can't keep up with modern threats. But the recent fossil record tells a different story: the solenodon is a survivor, persisting when nearly every other mammal around it went extinct." Mychajliw explains. To understand the hardiness of Solenodon documented in the fossil record, Mychajliw turned to an unusual source of data -- their feces. Using a technique called 'metabarcoding', she could genetically analyze the feces of modern Solenodon and piece together variations in their diet. Based on this data, she classified Solenodon as a 'flexible generalist' -- an animal capable of eating virtually anything. Mychajliw thinks that it is this flexibility that allowed Solenodon to survive human and climatic changes that made other species extinct.

Mychajliw hopes that by teaming with Caribbean conservationists, such as Grupo Jaragua of the Dominican Republic, this work can provide vital clues to tackling our current biodiversity crisis. "By partnering with a conservation group in the community where we work, we've been able to directly translate our fossil discoveries into a tangible example of what extinction really looks like and why we need to prevent it"

Image 1: Mychajliw and colleagues search caves for fossil evidence of extinction in the Caribbean (photo by Lauren Gibson).

Image 2: Solenodon, a bizarre venomous mammal from the Caribbean, survived extinction due to its generalist ecology (photo by Alexis Mychajliw). 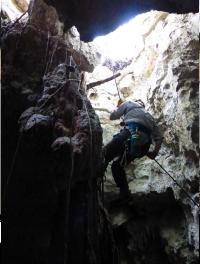