Despite their remarkably similar appearance, the "golden jackals" of East Africa and Eurasia are actually two entirely different species. The discovery, based on DNA evidence and reported in the Cell Press journal Current Biology on July 30, increases the overall biodiversity of the Canidae--the group including dogs, wolves, foxes, and jackals--from 35 living species to 36.

"This represents the first discovery of a 'new' canid species in Africa in over 150 years," says Klaus-Peter Koepfli of the Smithsonian Conservation Biology Institute in Washington, DC.

The new study, led by Koepfli and Robert Wayne of the University of California, Los Angeles, was inspired by recent reports suggesting that the African golden jackal was actually a cryptic subspecies of gray wolf. Those studies were based on an analysis restricted to mitochondrial DNA, which is passed along via the maternal lineage.

To expand the DNA evidence in the new study, Wayne retrieved DNA samples of golden jackals collected two decades ago in Kenya from his laboratory freezers. Koepfli and Wayne also established collaborations with colleagues, who provided them with samples from golden jackals in other parts of Africa and Eurasia. That genome-wide DNA evidence told a different story of the canids' evolutionary past.

"To our surprise, the small, golden-like jackal from eastern African was actually a small variety of a new species, distinct from the gray wolf, that has a distribution across North and East Africa," Wayne says. The researchers have named this previously unrecognized species the African golden wolf.

Koepfli and Wayne suspect that zoologists had mistaken African and Eurasian golden jackals for the same species because of a high degree of similarity in their skull and tooth morphology. However, the genetic data supports the idea that they are in fact two separate lineages that have been evolving independently for at least a million years. In fact, the new canid family tree suggests that these two lineages aren't even closely related. The African species is more closely related to the lineage leading to gray wolves and coyotes than jackals, which explains their new designation as African golden wolves.

The findings come as a reminder that "even among well-known and widespread species such as golden jackals, there is the potential to discover hidden biodiversity," with the help of genomic evidence, Koepfli says. The researchers say they will continue to study the relationships among golden jackal and wolf lineages in Africa, Eurasia, and the Middle East.

The research was supported by the Russian Ministry of Science, the National Geographic Society, CIBIO, Project ''Genomics Applied to Genetic Resources,'' the National Science Foundation, and the European Community Framework Program. 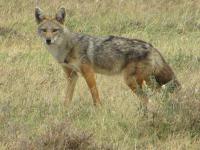