PRICE, UTAH, USA - Some 92 to 66 million years ago, as the Age of Dinosaurs waned, giant marine lizards called mosasaurs roamed an ocean that covered North America from Utah to Missouri and Texas to the Yukon. The air-breathing predators were streamlined swimmers that devoured almost everything in their path, including fish, turtles, clams and even smaller mosasaurs.

Coloradoan Gary Thompson discovered mosasaur bones near the Delta County town of Cedaredge in 1975, which the teen reported to his high school science teacher. The specimens made their way to Utah's Brigham Young University, where, in 1999, the creature that left the fossils was named Prognathodon stadtmani.

"I first learned of this discovery while doing background research for my Ph.D.," says newly arrived Utah State University Eastern paleontologist Joshua Lively, who recently took the reins as curator of the Price campus' Prehistoric Museum. "Ultimately, parts of this fossil, which were prepared since the original description in 1999, were important enough to become a chapter in my 2019 doctoral dissertation."

Upon detailed research of the mosasaur's skeleton and a phylogenetic analysis, Lively determined the BYU specimen is not closely related to other species of the genus Prognathodon and needed to be renamed. He reclassified the mosasaur as Gnathomortis stadtmani and reports his findings in the most recent issue of the Journal of Vertebrate Paleontology.

His research was funded by the Geological Society of America, the Evolving Earth Foundation, the Texas Academy of Science and the Jackson School of Geosciences at The University of Texas at Austin.

"The new name is derived from Greek and Latin words for 'jaws of death,'" Lively says. "It was inspired by the incredibly large jaws of this specimen, which measure four feet (1.2 meters) in length."

An interesting feature of Gnathomortis' mandibles, he says, is a large depression on their outer surface, similar to that seen in modern lizards, such as the Collared Lizard. The feature is indicative of large jaw muscles that equipped the marine reptile with a formidable biteforce.

"What sets this animal apart from other mosasaurs are features of the quadrate - a bone in the jaw joint that also forms a portion of the ear canal," says Lively, who returned to the fossil's Colorado discovery site and determined the age interval of rock, in which the specimen was preserved.

He says fossil enthusiasts can view Gnathomortis' big bite at the BYU Museum of Paleontology in Provo, Utah, and see a cast of the skull at the Pioneer Town Museum in Cedaredge, Colorado. Reconstructions of the full skeleton are on display at the John Wesley Powell River History Museum in Green River, Utah, and in BYU's Eyring Science Center.

"I'm excited to share this story, which represents years of effort by many citizen scientists and scholars, as I kick off my new position at USU Eastern's Prehistoric Museum," Lively says. "It's a reminder of the power of curiosity and exploration by people of all ages and backgrounds." 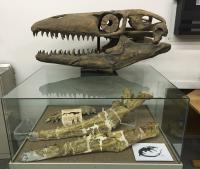 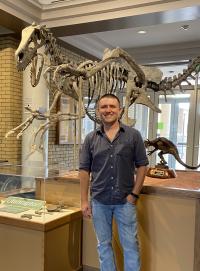