PASADENA, Calif.—In the summer of 2002, a week of heavy rains in Central Texas caused Canyon Lake—the reservoir of the Canyon Dam—to flood over its spillway and down the Guadalupe River Valley in a planned diversion to save the dam from catastrophic failure. The flood, which continued for six weeks, stripped the valley of mesquite, oak trees, and soil; destroyed a bridge; and plucked meter-wide boulders from the ground. And, in a remarkable demonstration of the power of raging waters, the flood excavated a 2.2-kilometer-long, 7-meter-deep canyon in the bedrock.

According to a new analysis of the flood and its aftermath—performed by Michael Lamb, assistant professor of geology at the California Institute of Technology (Caltech), and Mark Fonstad of Texas State University—the canyon formed in just three days.

A paper about the research appears in the June 20 advance online edition of the journal Nature Geoscience.

Our traditional view of deep river canyons, such as the Grand Canyon, is that they are carved slowly, as the regular flow and occasionally moderate rushing of rivers erodes rock over periods of millions of years.

Such is not always the case, however. "We know that some big canyons have been cut by large catastrophic flood events during Earth's history," Lamb says.

Unfortunately, these catastrophic megafloods—which also may have chiseled out spectacular canyons on Mars—generally leave few telltale signs to distinguish them from slower events. "There are very few modern examples of megafloods," Lamb says, "and these events are not normally witnessed, so the process by which such erosion happens is not well understood." Nevertheless, he adds, "the evidence that is left behind, like boulders and streamlined sediment islands, suggests the presence of fast water"—although it reveals nothing about the time frame over which the water flowed.

This is why the Canyon Lake flood is so significant. "Here, we know that all of the erosion occurred during the flood," Lamb says. "Flood waters flowed for several weeks, but the highest discharge—during which the bulk of the erosion took place—was over a period of just three days."

Lamb and Fonstad reached this conclusion using aerial photographs of the region taken both before and after the flood, along with field measurements of the topography of the region and measurements of the flood discharge. Then they applied an empirical model of the sediment-carrying capacity of the flood—that is, the amount of soil, rocks, boulders, and other debris carried by the flood to produce the canyon.

The analysis revealed that the rate of the canyon erosion was so rapid that it was limited only by the amount of sediment the floodwaters could carry. This is in contrast to models normally applied to rivers where the erosion is limited by the rate at which the underlying rock breaks and is abraded.

The researchers argue that the rate of erosion was rapid because the flood was able to pop out and cart away massive boulders (a process called "plucking")—producing several 10- to 12-meter-high waterfalls that propagated upstream toward the dam, along with channels and terraces. The flood was able to pluck these boulders because the bedrock below the soil surface of the valley was already fractured and broken.

The abrasion of rock by sediment-loaded waters—while less significant in terms of the overall formation of the canyon—produced other features, like sculpted walls, plunge pools at the bases of the waterfalls, and teardrop-shaped sediment islands. The sediment islands are particularly significant, Lamb says, because "these are features we see on Earth and on Mars in areas where we think large flow events have occurred. It's nice that here we're seeing some of the same features that we've interpreted elsewhere as evidence of large flow events."

The results, Lamb says, offer useful insight into ancient megafloods, both on Earth and on Mars, and the deep canyons they left behind. "We're trying to build models of erosion rates so we can go to places like Mars and make quantitative reconstructions of how much water was there, how long it lasted, and how quickly it moved," Lamb says. In addition, he says, "this is one of a few places where models for canyon formation can be tested because we know the flood conditions under which this canyon formed." 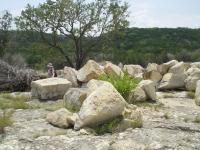 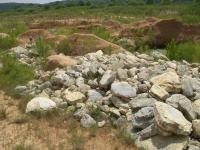