Every day, every inch of skin on your body comes into contact with thousands of molecules -- from food, cosmetics, sweat, the microbes that call your skin home. Now researchers can create interactive 3D maps that show where each molecule lingers on your body, thanks to a new method developed by University of California San Diego and European Molecular Biology Laboratory (EMBL) researchers. The technique is published December 21 in Nature Protocols.

The goal of this 3D mapping is to better understand how molecules from our surroundings, as well those produced by our bodies and the microbial communities on our skin, influence one another and our health. When the team previously used this approach to map the molecules on the skin of two volunteers, they found prevalent traces of sunscreen and other hygiene products, even three days after they'd last been used.

The 3D molecular mapping method is the brainchild of Pieter Dorrestein, PhD, professor in UC San Diego School of Medicine and Skaggs School of Pharmacy and Pharmaceutical Sciences, Theodore Alexandrov, PhD, team leader at EMBL in Germany, and their teams. They determined how best to collect the samples, determine their chemical composition using mass spectrometry, and build the mapping software used for analysis.

After they were approached by many colleagues from fields as diverse as forensics, cosmetics, ecology and agriculture, the researchers converted the 3D molecular mapping method into a step-by-step recipe with intuitive software and made it available to the global scientific community.

Below are a few samples of the mapping technology and some of their possible applications:

Image #1. Can you guess which four digits a volunteer typed into this ATM machine? If you guessed 8, 0, 1 and 7, you were right. The color of the dots represents the amount of a molecule that was transferred from the person's finger to the keypad. "There are much easier ways of stealing someone's PIN," Alexandrov said. "We had to first clean the ATM machine with methanol, then swab it and perform mass spectrometry, so it's unlikely someone would steal your PIN this way. But it does show nicely that we transfer molecules from our skin to the objects we interact with -- and that we can measure and map that. This has raised lots of interest from forensics experts." In previous work, for instance, Alexandrov and Dorrestein were able to make predictions about people's lifestyle -- such as medications, food and diet preferences -- based on the molecules found on their cell phones.

Image #2. "This is just a sprig of rosemary that we collected on campus at UC San Diego in La Jolla, California, but it demonstrates that the method can be applied to agriculture," Dorrestein said. "You could use this molecular mapping technique to determine if pesticides or other products applied to a field are spreading to neighboring fields, and if there are patterns in that spread." In this image, you can see that the old leaves at the bottom of the rosemary plant have much higher levels of the flavonoid cirsimaretin than the newer leaves at the top. Using maps like this, scientists can study how plants transport molecules from old leaves to young ones, or how they react to stress.

The team has used this method previously to: 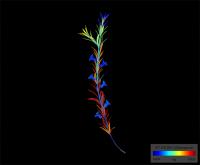