With age comes the ability to better regulate emotions in order to not disrupt performance on a memory-intensive task, according to a study published in the March issue of the journal Psychology and Aging.

The research study found that regulating emotions – such as reducing negative emotions or inhibiting unwanted thoughts – is a resource-demanding process that disrupts the ability of young adults to simultaneously or subsequently perform tasks.

"This study is among the first to demonstrate that the costs of emotion regulation vary across age groups," said Fredda Blanchard-Fields, chair of Georgia Tech's School of Psychology and the study's lead author.

The study – which included 72 young adults who were 20 to 30 years old and 72 adults who were 60 to 75 years old – was funded by the National Institutes of Health. It was conducted by Blanchard-Fields and Susanne Scheibe, a former postdoctoral fellow at Georgia Tech currently at Stanford University.

For the investigation, three-fourths of the participants watched a two-minute Fear Factor television clip depicting a woman eating something revolting in order to win money. The video was intended to induce a feeling of disgust in the participants. The remaining participants comprising the control group watched a two-minute clip of two men talking about a woman's dress and subsequently sharing a beer in silence that was not intended to induce emotions.

After watching one of the videos, each participant played a computer memory game. For the task, a number – between zero and nine – appeared on a computer screen and each participant had to determine whether that number matched the number that appeared on the screen two numbers earlier. Twenty-two trials were presented before the task concluded and a combined performance score was computed.

"To compare the effect that a person's emotion regulation strategies had on his or her performance at the working memory task, the participants who watched the disgust-inducing film were divided into three groups and given different emotion-regulatory instructions," explained Blanchard-Fields.

One group was told to change their negative reaction to the disgusting television clip into positive feelings as quickly as possible and another group was advised to maintain the intensity of their negative reaction to the video and to not change their feelings in any way. A third group received no instructions. The control group that watched the neutral video of the men drinking beer also received no instructions. The volunteers then completed two additional memory games.

The study showed that all of the participants performed better at the working memory task after watching the clip than before, likely due to the learning process. However, after being told to turn their disgust into positive feelings, the young adults performed significantly worse than the older adults in the memory task. Older adults who were given the same instructions continued to improve at the memory task.

"Negative emotions can be toxic and disrupt one's balance in life, so the ability of older adults to regulate negative emotions serves to enhance their quality of life," noted Blanchard-Fields. "Older adults are so efficient at dealing with their emotions that it doesn't cost them any decrease in performance, which is a really positive thing."

The trial also showed that having feelings of disgust by themselves did not have an effect on performance, as the participants in the control group and the no-instruction group performed similarly in the computer tasks. It also showed that maintaining feelings of disgust that were already present did not disrupt performance in the computer tasks in either age group.

To ensure that feelings of disgust were induced by the film clip, participants reported the extent to which they felt each of eight emotions – disgusted, sad, frustrated, distressed, angry, happy, content and interested – at the beginning of the study, after watching a clip and after each computer task. Watching the Fear Factor video produced elevated disgust ratings in all participants.

After watching the video clip and completing two computer tasks, the group that was told to turn their disgust into positive feelings and the control group both felt the same level of disgust as they did before watching the video. The no-instruction group returned to their baseline level after three computer tasks, and the group asked to maintain their feelings of disgust still had significantly elevated disgust ratings at the final emotion assessment.

"This study tested participants' abilities to perform a computer memory task after watching a clip that induced disgust, but additional research should be conducted to determine whether the present findings apply to all types of cognitive tasks or to all types of negative emotions," explained Blanchard-Fields. For example, sadness is an emotion that is highly relevant to old age and therefore may be harder for older adults to regulate than disgust.

"The amount of resources necessary for older adults to maintain or regain emotional well-being, while performing well at other tasks might be less because they have a wealth of past experience in regulating their emotions – they've been doing it for a long time," said Blanchard-Fields. "On the other hand, younger adults don't tend to regulate their emotions, so it takes effort, which draws away resources so that they don't perform as well on tasks." 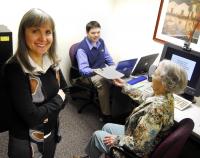