Some of the world's largest, most spectacular and unheralded mammals are silently slipping away, species like Tibetan wild yaks and Patagonia's huemul, Bhutan's takin and Vietnam's saola. Even Africa's three species of zebras and wildebeest have suffered massive reductions over the last several decades.

The reasons for these losses are more than disease and habitat fragmentation, deforestation or wildlife trade, according to researchers. Ultimately, the cause is rampant human population growth. And unless human behavior changes in unprecedented ways, these scientists warn that future communities of these mammals will never resemble those of the recent past or even today.

The findings are based on a new study, "Disassembled food webs and messy projections: modern ungulate communities in the face of unabating human population growth," published June 9 in Frontiers in Ecology and Evolution.

Joel Berger, lead author of the study and a professor at Colorado State University, said that the time for action is now, and that touting past conservation achievements does little to better humanity's future.

"We all must realize we're members of a broad, beautiful and living planet, and we must find ways to subsist in this together or suffer more severe consequences than what we already see," said Berger, also a senior scientist at the Wildlife Conservation Society (WCS). "For many assemblages of animals, we are nearing a moment in time, when, like Humpty Dumpty, we will not be able to put things back together again." Berger is also the Barbara Cox Anthony University Chair of Wildlife Conservation at CSU.

In this study, the research team - which also included Alejandro Vila, the director for Science for WCS's Patagonia Program; Cristobal Briceno, a professor and veterinarian at University of Chile; and Joanna Lambert, a professor at the University of Colorado Boulder - analyzed direct and indirect disruptions that lead to the changing roles of mammals in global ecosystems and noted how the nature of ecological interactions has changed and will do so, on an even larger scale, in coming decades.

More specifically, they looked at what has transpired with the huemul in Patagonia, takin in Bhutan, wild horses in deserts, wolves and coyotes in North America, and the inevitability of change in big ecosystems as large carnivores are extirpated.

Scientists said this is happening as the human population increases it footprint on land.

"Even in the remote reaches of the Himalayas, stray and feral dogs, a direct result of human intrusions, wreak havoc on wild and domestic species of high economic value and cultural importance," said Tshewang Wangchuk, a study co-author, conservation biologist and president of the Bhutan Foundation.

Humans only recently colonized parts of the Himalayas, areas where ice has receded due to warming temperatures. Yet, the authors also point to human population change at a global scale. In 1830 when Vice-Admiral Robert Fitzroy captained his ship, the Beagle, through the Magellan Straits of South America, fewer than 1.2 billion people inhabited Earth. By Earth Day in 1970, there were more than 3.5 billion.

The research team said worldwide food webs have become irretrievably altered by humans, with little hope to reconstitute even recent past conditions or to put back the ecological functions once created by native species.

Feral pigs, for instance, exist today on every continent except Antarctica, and in 70 percent of the states in the United States. These animals disrupt fish, reptiles, birds and other small mammals, plants and soils. In addition, climate change warms the oceans, which in turn foments marine algal blooms, reducing fishery catches. With less demand for fish, a consequent uptick in wildlife poaching on land occurs.

The scientists also documented how an appetite for fashion like cashmere increases imports to the west from Mongolia, India and China, resulting in economic incentives for desert pastoralists to produce more domestic goats in central Asia. These goats compete for food with native species and are in danger due to increasing numbers of dogs in these areas. The dogs are not only predators but also carry diseases, which jeopardizes endangered species like snow leopards, kiang and Przewalksi's gazelle.

Use 'ecological grief' to implement action

Berger and the study authors suggest that despite the grim findings, all is not yet lost.

And although food webs with large mammals will be different from those of the past and operate differently today, there are options to shape the future.

"It is not too late and we simply do not have the luxury of time to mourn what we have lost," said Lambert. "We need to use our ecological grief to implement action and honor the exceptional biodiversity that remains. This can be done by protecting large tracts of the planet's wild places." 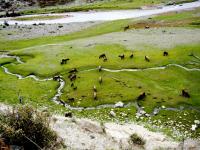