The new species, named Vespamantoida wherleyi, was discovered near the Amazon River in Peru in 2013 during a general entomological survey of the field site. The male specimen was attracted to a light trap, and its bright coloration and wasp-like shape and behavior immediately caught the team's eye.

"Typically, the majority of species differentiation is discovered and confirmed within a lab or collection setting," explains Dr. Svenson. "To have that rare eureka moment where you know you have found something new in the field is incredibly exciting."

The mantis exhibited a bright red-orange coloration, as well as the body structure, erratic locomotion patterns, and even antennae behavior typically associated with most wasp species. This apparent style of mimicry, known as Batesian mimicry, is a strategy in which a mostly harmless organism adopts the appearance, and occasionally the behaviors, of an organism known to pose a greater threat to would-be predators.

"In nature, when you are intentionally conspicuous, you are advertising something," says Dr. Svenson. "When you are a species that can be easily taken as prey, you advertise because you want predators to think that you are poisonous, or could injure them, or any combination of unpleasant factors that tell the predator to think twice before pursuing you."

In the mantis world, mimicry of vegetation is a fundamental strategy, but wasp mimicry in adults is unique, and limited to just one family, of which Vespamantoida is now a part. Until the discovery of V. wherleyi, however, mantis mimicry strategies were theorized to aid the mantis primarily in hiding from predators, and occasionally in luring prey. The conspicuous appearance and behavior of V. wherleyi represent a novel form of defensive mimicry whereby the mantis imitates a harmful organism's natural defense signals to warn predators away. It is a strategy that is unique among known mantises.

"There are about 2,500 species of mantises described," says Dr. Svenson. "I'd put a bet on there being about 5,000. So, I think we're just halfway there. I think the most interesting thing about this family of mantises is the fact that most of the adults do mimic wasps, and that is quite unique for praying mantises. I think the next natural thing is to study the evolutionary biology of the lineage. If wasp mimicry is successful in this lineage, why has it not evolved in the other lineages as well? Why have no other species within the family evolved brightly colored wasp mimicry? We're just not sure." 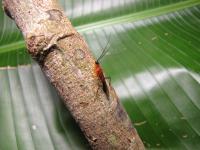