Less than 80 miles from Prudhoe Bay, home to the giant oil fields that feed the Trans-Alaska Pipeline, lies the site of USGS' latest oil and gas assessment: the National Petroleum Reserve-Alaska and adjacent areas. Managed by the Bureau of Land Management, the NPR-A covers 22.8 million acres, more than the entire state of South Carolina.

The new USGS assessment estimates 8.7 billion barrels of oil and 25 trillion cubic feet of natural gas resources. This is a more than sixfold increase from the previous USGS estimates in the region, which include parts of the 2005 Central North Slope assessment and the 2010 NPR-A assessment.

The USGS decision to reassess the NPR-A came after several industry announcements of potential large discoveries in the area, much greater than previously thought. The Pikka and Horseshoe oil discoveries near the Colville River delta just outside NPR-A were announced in 2015 and 2017. Industry announcements suggest that the two discoveries 21 miles apart likely are in the same oil pool, which may hold more than 1 billion barrels of recoverable oil.

"Advances in technology and our understanding of petroleum geology are constantly moving forward," said Walter Guidroz, program coordinator of the USGS Energy Resources Program. "That's why the USGS re-evaluates and updates our assessments, to give decision-makers the best available science to manage our natural resources."

Industry announced the discovery of the Willow oil pool in the Nanushuk Formation in NPR-A in 2017 with estimated resources of more than 300 million barrels of oil. Multiple wells have been announced to be drilled during the 2017-2018 winter drilling season at both Pikka-Horseshoe and Willow to further delineate these discoveries.

Although the USGS has a range of potential for the new estimates of oil and gas resources, there is significant uncertainty with these values. Until further wells are drilled and oil production is initiated, it is difficult to be certain about the resource potential. Nevertheless, a sufficient amount of data is available to confirm that the potential size of oil pools in the Nanushuk and Torok Formations is six times larger than previously thought.

Prior to 2015, about 150 exploration wells had penetrated the Nanushuk and Torok Formations, and oil discoveries were limited to a few small oil pools (less than 10 million barrels) in stratigraphic traps and one larger oil pool (more than 70 million barrels) in a structural trap.

The new USGS assessment of the Nanushuk and Torok Formations estimated that oil and gas resources are not uniformly distributed across the region, and divided each formation into three assessment units. These assessment units were defined based on geological character documented using data from seismic-reflection surveys, exploration wells, and outcrops.

This assessment did not include rocks older than the Torok Formation in NPR-A because those rocks have not been penetrated by exploration drilling since previously assessed in 2010, and thus no new information is available about their oil and gas potential. The 2010 assessment of those older rocks in NPR-A estimated that they hold 86 million barrels of oil and nearly 15 trillion cubic feet of gas.

These assessments of oil and gas resources follow a publicly available, peer-reviewed methodology that is used for all USGS conventional resource assessments. That allows resource managers, decision-makers and others to make apples-to-apples comparisons across all of the Nation's petroleum-producing basins. In addition, USGS periodically reassesses basins to ensure that the latest trends in industry production, new discoveries, or updates in our understanding of the geology are reflected in the USGS resource estimates.

The 2017 USGS National Petroleum Reserve-Alaska assessment can be found here. For more information on USGS oil and gas assessments, please visit our Energy Resources Program website, sign up for our newsletter, and follow us on Twitter.

Permafrost in the National Petroleum Reserve-Alaska 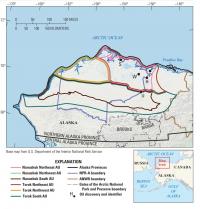 Map of the USGS NPR-A Assessment