Radio waves are used for many measurements and applications, for example, in communication with mobile phones, MRI scans, scientific experiments and cosmic observations. But 'noise' in the detector of the measuring instrument limits how sensitive and precise the measurements can be. Now researchers at the Niels Bohr Institute have developed a new method where they can avoid noise by means of laser light and can therefore achieve extreme precision of measurements. The results are published in the prestigious scientific journal, Nature.

'Noise' in the detector of a measuring instrument is first and foremost due to heat, that causes atoms and electrons to move chaotically, so the measurements become imprecise. The usual method to reduce noise in the detector of the measuring equipment is therefore to cool it down to 5-10 degrees Kelvin, which corresponds to approx. minus 265 degrees C. This is expensive and stille does not allow to measure the weakest signals.

"We have developed a detector that does not need to be cooled down, but which can operate at room temperature and yet hardly has any thermal noise. The only noise that fundamentally remains is so-called quantum noise, which is the minimal fluctuations of the laser light itself," explains Eugene Polzik, Professor and Head of the research center Quantop at the Niels Bohr Institute at the University of Copenhagen.

The method, called optomechanics, is a complex interaction between a mechanical movement and optical radiation.

"In our system, one metal plate in the capacitor is replaced by a 50 nanometer thick membrane (a nanometer is a millionth of a millimeter). It is this nanomembrane that allows us to make ultrasensitive measurements without cooling the system, explains Research Assistant Professor Albert Schliesser, who has coordinated the the experiments in Quantop's optomechanical laboratory at the Niels Bohr Institute.

He explains that the capacitor is made up of three layers. At the bottom is a chip made of glass with a layer of aluminum, where the positive and negative poles are. The nanomembrane itself is made of silicon nitrate and is coated with a thin layer of aluminum, since there has to be a metallic substance to better interact with the electric field. The chip and the membrane are only separated by a micrometer.

The radio wave signal produces fluctuations in the membrane and you can now read the signal optically using a laser beam. This is done through a complex interaction between the membrane's mechanical fluctuations, the electrical properties of the metallic layer and the light that is hitting the membrane.

The method was developed by Eugene Polzik and Albert Schliesser in collaboration with the theoretical quantum optics groups at the Niels Bohr Institute and the Joint Quantum Institute in Maryland, USA. The electromechanical chip was developed at Nanotech, DTU.

The electrical noise is technical and is mostly due to disturbances from the environment.

"This has been a technical challenge and the two PhD students Tolga Bagci and Anders Simonsen have worked days and nights to solve the problem. The solution has been to find just the right way to shield the experiment," says Albert Schliesser. Everything takes place at normal room temperature and yet there is almost no mechanical 'thermal noise'. This is surprising and is due to several factors - including the membrane's extremely high mechanical properties and that the membrane is separated from the surroundings by being enclosed in a vacuum chamber so that it responds as if it had been cooled down to two degrees Kelvin (minus 271 C).

The laser light has almost no noise, as all its photons are identical. In this way, the special properties of the nanomembrane are fully exploited.

"This membrane is an extremely good oscillator and that is why it is so ultrasensitive. At room temperature, it works as effectively as if it was cooled down to minus 271 C and we are working to get it even closer to minus 273 degrees C, which is the absolute minimum. In addition, it is a huge advantage to use optical detection, as instead of using ordinary copper wires to transmit the signal, you can use fiber optic cables, where there is no energy loss," explains Eugene Polzik.

This is a groundbreaking new method for measuring electrical signals that could have a significant impact on future technologies. Eugene Polzik and Albert Schliesser see great potential in the new super sensitive method, both in equipment for medical treatment and for observations in space, where cosmologists measure radio radiation in order to study the infancy of the universe. 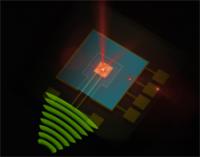