They shed light on atomic and molecular processes: ultrashort laser pulses are required to study extremely fast quantum phenomena. For years, scientists have been trying to tune the shape of light waves so as to, for instance, steer an electron on exactly the right path. At the TU Vienna, an extraordinarily powerful new method to influence the shape of the laser light wave has been developed in cooperation with the Imperial College in London and the Max-Born-Institute in Berlin. Much like the characteristic sound of a musical instrument, which results from the combination of different frequencies, a characteristic laser waveform can be designed by cleverly combining different frequencies of light. The crucial ingredient is a long-wavelength component – the bass, speaking in musical terms.

An attosecond is a billionth of a billionth of a second. That is the unimaginably short time scale on which processes such as the motion of an electron in an atom can be studied. "Attosecond light pulses can be created by firing a laser pulse which is a thousand times longer onto atoms", says Stefan Haessler, a scientist at Vienna University of Technology. First, the laser pulse tears an electron from the atom and drags it away.

After a short time however, the electron gets decelerated by the oscillating laser field and eventually pushed back towards its atom leading to a re-collision. "The exact shape of the laser wave determines whether or not the electron hits the atom and with which energy this collision takes place", says Stefan Haessler. Ideally, the electron gains so much energy in the laser field that upon impact with the atom, a much shorter flash of light with very high energy is emitted – an attosecond laser pulse, with a frequency in the ultraviolet- or x-ray regime.

Attempts to control the shape of the laser wave have already been made: The laser frequency can be doubled and then the original wave is combined with the double-frequency-wave. However, the shaping possibilities opened up by this simple frequency doubling technique are limited.

At the TU Vienna, a complementary method was developed: not only a higher-frequency wave is added to the laser pulse, but also a lower-frequency one. The laser wave is accompanied with an "optical bass", and this dramatically extends the range of possibilities for waveform shaping.

"We can tune the intensity and the relative phase of three different frequencies", says Stefan Haessler, "this brings us close to the 'perfect wave', which can be calculated in numerical simulations." With the newly shaped laser pulses, electrons can be ripped from the atoms very efficiently, and the electrons subsequently gain a large amount of energy. That way, the team succeeded in creating attosecond pulse radiation a hundred times more intense than simple sine-shaped waves could produce.

Stefan Haessler is convinced that many other laser-driven effects could be optimized this way as well. Not only atoms, but also molecules, plasmas or solids could be irradiated with specially shaped laser waves, inducing many different effects. In principle, the method can be scaled up: knowing how to add lower frequencies to the laser pulse, even more frequencies can now be combined. A larger number of frequencies means more possibilities for wave shaping, just like a composer finds more ways of expression composing not just for a flute, but for a full orchestra. 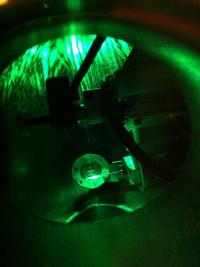