You may have never seen or heard of it, but hair ice - a type of ice that has the shape of fine, silky hairs and resembles white candy floss - is remarkable. It grows on the rotten branches of certain trees when the weather conditions are just right, usually during humid winter nights when the air temperature drops slightly below 0°C. Now, a team of scientists in Germany and Switzerland have identified the missing ingredient that gives hair ice its peculiar shape: the fungus Exidiopsis effusa. The research is published today (22 July) in Biogeosciences, an open access journal of the European Geosciences Union (EGU).

"When we saw hair ice for the first time on a forest walk, we were surprised by its beauty," says Christian Mätzler from the Institute of Applied Physics at the University of Bern in Switzerland. "Sparked by curiosity, we started investigating this phenomenon, at first using simple tests, such as letting hair ice melt in our hands until it melted completely."

Then Mätzler, a physicist, joined forces with a chemist (Diana Hofmann) and a biologist (Gisela Preuß) in Germany. Inspired by earlier work, and by photographs of hair ice sent in from various countries, the team performed a set of experiments to figure out just what conditions are needed to grow this type of ice and what its properties are. In the process, they confirmed a 100-year-old theory for the origin of hair ice.

Alfred Wegener, of tectonic-plate fame, was the first to study hair ice. In 1918, he noticed a whitish cobwebby coating on the surface of hair-ice-bearing wood, which his assistant identified as fungus mycelium - the mass of thin threads from where mushrooms grow. He suggested there was a relation between the ice and the fungus in the wood. Some 90 years later, Gerhart Wagner, a retired Swiss professor who has been researching hair ice for decades, found evidence of this relation: treating the wood with fungicide or dunking it in hot water suppressed the growth of hair ice. But the fungus species and the mechanism that drives the growth of hair ice was yet to be identified.

That was the aim of the researchers who have now published their work in Biogeosciences. Preuß studied samples of hair-ice-bearing wood collected in the winters of 2012, 2013 and 2014 in forests near Brachbach in western Germany. She analysed the wood samples using microscopic techniques and identified eleven different species of fungi. "One of them, Exidiopsis effusa, colonised all of our hair-ice-producing wood, and in more than half of the samples, it was the only species present," she says.

Mätzler, on the other hand, performed experiments designed to better understand the physics of hair ice on samples he collected in a forest at Moosseedorf, Switzerland. He found, confirming guesses by other researchers, that the driving mechanism responsible for producing ice filaments at the wood surface is ice segregation. Liquid water near the branch surface freezes in contact with the cold air, creating an ice front and 'sandwiching' a thin water film between this ice and the wood pores. Suction resulting from repelling intermolecular forces acting at this 'wood-water-ice sandwich' then gets the water inside the wood pores to move towards the ice front, where it freezes and adds to the existing ice. "Since the freezing front is situated at the mouth of the wood rays, the shape of the growing ice is determined by the wood rays at their mouth," says Mätzler.

"The same amount of ice is produced on wood with or without fungal activity, but without this activity the ice forms a crust-like structure. The action of the fungus is to enable the ice to form thin hairs - with a diameter of about 0.01 mm - and to keep this shape over many hours at temperatures close to 0°C. Our hypothesis includes that the hairs are stabilised by a recrystallisation inhibitor that is provided by the fungus."

Hofmann then studied the hair ice itself. Her chemical analyses of the melted ice showed the water to contain fragments of the complex organic compounds lignin and tannin. Since these are metabolic products of the fungal activity, this finding further confirms the biological influence on hair ice. "These components may be the ones preventing the formation of large ice crystals at the wood surface," says Hofmann.

The researchers say a reason why it took almost 100 years to confirm Wegener's hypothesis is that hair ice is a somewhat rare and fleeting phenomenon, spotted mainly in broadleaf forests at latitudes between 45 and 55°N. "Hair ice grows mostly during the night and melts again when the sun rises. It's invisible in the snow and inconspicuous in hoarfrost," says Preuß.

Keep an eye out next time you go for an early morning walk in the woods. If you can find hair ice, you are in for a treat.

Please mention the name of the publication (Biogeosciences) if reporting on this story and, if reporting online, include a link to the paper (TBA) or to the journal website.

Hair Ice in a Forest 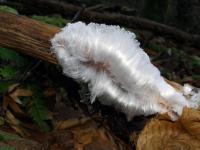