In the future, tiny air vehicles may be able to fly through cracks in concrete to search for earthquake victims, explore a contaminated building or conduct surveillance missions for the military. But today, designing the best flying mechanism for these miniature aerial machines is still a challenging task.

Creating micro-scale air vehicles that mimic the flapping of winged insects or birds has become popular, but they typically require a complex combination of pitching and plunging motions to oscillate the flapping wings. To avoid some of the design challenges involved in mimicking insect wing strokes, researchers at the Georgia Institute of Technology propose using flexible wings that are driven by a simple sinusoidal flapping motion.

"We found that the simple up and down wavelike stroke of wings at the resonance frequency is easier to implement and generates lift comparable to winged insects that employ a significantly more complex stroke," said Alexander Alexeev, an assistant professor in Georgia Tech's School of Mechanical Engineering.

Details of the flapping motion proposed by Alexeev and mechanical engineering graduate student Hassan Masoud were presented on Nov. 22 at the 63rd Annual Meeting of the American Physical Society Division of Fluid Dynamics. A paper published in the May issue of the journal Physical Review E also reported on this work, which is supported in part by the National Science Foundation through TeraGrid computational resources.

In nature, flapping-wing flight has unparalleled maneuverability, agility and hovering capability. Unlike fixed-wing and rotary-wing air vehicles, micro air vehicles integrate lifting, thrusting and hanging into a flapping wing system, and have the ability to cruise a long distance with a small energy supply. However, significant technical challenges exist in designing flapping wings, many motivated by an incomplete understanding of the physics associated with aerodynamics of flapping flight at small size scales.

"When you want to create smaller and smaller vehicles, the aerodynamics change a lot and modeling becomes important," said Alexeev. "We tried to gain insight into the flapping aerodynamics by using computational models and identifying the aerodynamic forces necessary to drive these very small flying machines."

Alexeev and Masoud used three-dimensional computer simulations to examine for the first time the lift and hovering aerodynamics of flexible wings driven at resonance by sinusoidal oscillations. The wings were tilted from the horizontal and oscillated vertically by a force applied at the wing root. To capture the dynamic interactions between the wings and their environment, the researchers used a hybrid computational approach that integrated the lattice Boltzmann model for fluid dynamics and the lattice spring model for the mechanics of elastic wings.

The simulations revealed that at resonance -- the frequencies when a system oscillates at larger amplitudes -- tilted elastic wings driven by a simple harmonic stroke generated lift comparable to that of small insects that employ a significantly more complex stroke. In addition, the simulations identified one flapping regime that enabled maximum lift and another that revealed maximum efficiency. The efficiency was maximized at a flapping frequency 30 percent higher than the frequency for maximized lift.

"This information could be useful for regulating the flight of flapping-wing micro air vehicles since high lift is typically needed only during takeoff, while the enhanced aerodynamic efficiency is essential for a long-distance cruise flight," noted Masoud.

To facilitate the design of practical micro-scale air vehicles that employ resonance flapping, the researchers plan to examine how flapping wings can be effectively controlled in different flow conditions including unsteady gusty environments. They are also investigating whether wings with non-uniform structural and mechanical properties and wings driven by an asymmetric stroke may further improve the resonance performance of flapping wings. 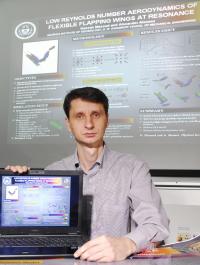