Scientists have tracked the flight paths of a group of bumblebees throughout their entire lives to find out how they explore their environment and search for food.

This is believed to be the first time any insect has been tracked throughout its whole life.

In this unconventional study, the researchers from Queen Mary University of London (QMUL) discovered the individual bumblebees differed greatly from one another in the way they flew around the landscape when foraging for nectar.

It was also revealed the bees combined exploration of their environment with making the most of food sources they had already discovered.

Bees provide an invaluable service to both natural and agricultural ecosystems by pollinating flowers. Understanding how they use the space available to them, and how and when they find food, will provide valuable insights into how to manage landscapes to benefit plants, insects and agricultural crops.

Dr Joseph Woodgate, of the School of Biological and Chemical Sciences at QMUL, said: "This study provided an unprecedented look at where the bees flew, how their behaviour changed as they gained experience and how they balanced the need to explore their surroundings - looking for good patches of flowers - with the desire to collect as much food as possible from the places they had already discovered."

The bees were tracked using harmonic radar technology and a small, light-weight piece of electronic equipment which was attached to each one. In total, 244 flights made by four bees were recorded, encompassing more than 15,000 minutes and covering a total distance of more than 180km.

Professor Lars Chittka, coordinator of the study, said: "For the first time, we have been able to record the complete 'life story' of a bee. From the first time she saw the light of day, entirely naive to the world around her, to being a seasoned veteran forager in an environment full of sweet nectar rewards and dangerous threats, to her likely death at the hands of predators, or getting lost because she has ventured too far from her native nest."

Dr James Makinson, who is joint-first-author with Dr Woodgate, added: "One bee was something of a lifelong vagabond, never settling down on a single patch of flowers. In contrast another of our bees was exceptionally diligent, quickly switching after only three flights from exploration of the surrounding environment to focusing exclusively on a single forage location for six consecutive days.

"After six days this bee switched her attention to a closer forage source. She was able to do this without re-exploring her environment, suggesting she had remembered the location from her initial explorations. Our other two bees interspersed foraging for a single location with exploratory flights throughout their entire life."

The researchers identified two categories of flight - exploration and exploitation flights. Exploitation of memorised food sources takes place during efficient trips usually to a single foraging location. This is rarely combined with the exploration of unfamiliar areas.

Meanwhile, exploration of the landscape typically occurs in the first few flights made by each bee and this is when bees discover most of the places they will return to for feeding during their lives, although further exploration flights are sometimes made.

The results could help us understand how to manage crops so as to maximise the free pollination services provided by wild bees as well as how to manage conservation efforts to allow wild bee populations to flourish. The study could also help to explain the way the genes of bee-pollinated plants spread throughout the landscape and shed light on the way parasites and diseases can be spread between patches of plants.

The paper, titled 'Life-long radar tracking of bumblebees', was produced in collaboration with Rothamsted Research and was published in the PLOS ONE journal. 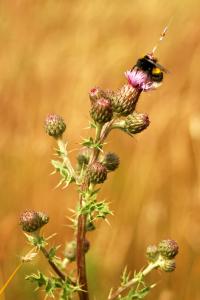 A Bumblebee Sitting on a Dead Thistle