How a system behaves is determined by its interaction properties. An important concept in condensed matter physics for describing the energy distribution of electrons in solids is the Fermi surface, named for Italian physicist Enrico Fermi. The existence of the Fermi surface is a direct consequence of the Pauli exclusion principle, which forbids two identical fermions from occupying the same quantum state simultaneously. Energetically, the Fermi surface divides filled energy levels from the empty ones. For electrons and other fermionic particles with isotropic interactions – identical properties in all directions - the Fermi surface is spherical. "This is the normal case in nature and the basis for many physical phenomena," says Francesca Ferlaino from the Institute for Experimental Physics at the University of Innsbruck. "When the particle interaction is anisotropic – meaning directionally dependent – the physical behavior of a system is completely altered. Introducing anisotropic interactions can deform the Fermi surface and it is predicted to assume an ellipsoidal shape." The deformation of the Fermi surface is caused by the interplay between strong magnetic interaction and the Pauli exclusion principle stated above. Francesca Ferlaino and her experimental research group have now been able to show such a deformation for the first time.

For their experiment, the quantum physicists confined a gas of fermionic erbium atoms in a laser trap and cooled it to almost absolute zero. The element erbium is strongly magnetic, which causes extreme dipolar behavior. The interaction between these atoms is, therefore, directionally dependent. When the physicists then release the ultracold gas from the trap they are able to infer the shape of the Fermi surface from the momentum distribution of the particles. "Erbium atoms behave similarly to magnets, which means that their interaction is strongly dependent on the direction in which the particles interact. Our experiment shows that the shape of the Fermi surface depends on the geometry of the interaction and is not spherical anymore," explains first author of the study Kiyotaka Aikawa the phenomenon that is extremely difficult to observe.

"The general question we deal with here is how the geometry of particle interactions influences the quantum properties of matter," explains Francesca Ferlaino. Answering this question is of interest for physicists from different branches of physics such as the study of high-temperature superconductors. "We need a better understanding of these properties to develop new quantum systems," underlines Francesca Ferlaino. Ultracold quantum gases once more provide an ideal platform for simulating complex scenarios.

This work was financially supported by the Austrian Ministry of Science, the Austrian Science Fund FWF and the European Union. Since July 2014 ERC and START awardee Francesca Ferlaino is Scientific Director at the Institute for Quantum Optics and Quantum Information (IQOQI) of the Austrian Academy of Sciences.

New insights into the world of quantum materials 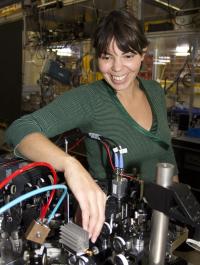