Preclinical studies show that gene therapy can improve muscle strength in small- and large-animal models of a fatal congenital pediatric disease known as X-linked myotubular myopathy. The results, appearing in the Jan. 22 issue of Science Translational Medicine, also demonstrate the feasibility of future clinical trials of gene therapy for this devastating disease.

Researchers, based at the University of Washington, Seattle, Washington, Généthon, France, Boston Children's Hospital in Massachusetts, and Virginia Polytechnic Institute and State University (Virginia Tech) in Blacksburg, Virginia, conducted the study. The scientists found that both mice and dogs responded from a single intravascular injection of AAV, produced at Généthon, with robust improvement in muscle strength, corrected muscle structure at the microscopic level, and prolonged life. No toxic or immune response was observed in the dogs.

These results demonstrate the efficacy of gene replacement therapy for myotubular myopathy in animal models and pave the way to a clinical trial in patients.

Children born with X-linked myotubular myopathy, which affects about 1 in 50,000 male births, have very weak skeletal muscles, causing them to appear floppy, with severe respiratory difficulties. Survival beyond birth requires intensive support, often including tube feeding and mechanical ventilation, but effective therapy is not available for patients, and most die in childhood.

Based on seminal work on local and systemic administration in a mouse model of the disease performed by Anna Buj-Bello at Généthon since 2009, Martin K. Childers, a professor of rehabilitation medicine and a regenerative medicine researcher at the University of Washington, worked with the Buj-Bello and Beggs groups.

"The implications of the pre-clinical findings are extraordinary for inherited muscular diseases," said Childers, co-senior author on the paper, and co-principal investigator of the study. "Two of our dogs treated with adenovirus gene therapy appear almost normal with little, if any, evidence, even microscopically, of disease caused by XLMTM."

"These results are the culmination of four years of research and show how gene therapy is effective for this genetic muscle disease," said Buj-Bello. "We finally can envision a clinical trial in patients. These are very promising results for future trials in humans. "

"The functional improvement was truly remarkable," said Grange. "It is both incredibly exciting and humbling to contribute to such a meaningful project – a true highlight of our careers." 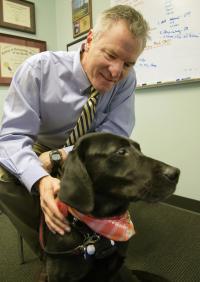