Until now, it was presumed that the last glacial period denuded the Scandinavian landscape of trees until a gradual return of milder weather began and melted away the ice cover some 9000 years ago. That perspective is now disproved by research headed by Professor Eske Willerslev from the Centre for GeoGenetics, University of Copenhagen, Denmark, Laura Parducci from the University of Uppsala, Sweden, and Inger Greve Alsos from Tromsø University Museum, Norway. Their research teams show that some Scandinavian conifers survived the inhospitable ice age climate likely for several thousands of years. The result is to be published in the esteemed scientific journal, Science.

The story of Scandinavian forests needs revamping when it comes to the history of conifers, spruce and pine in particular. Until now, researchers believed that contemporary coniferous forests in Scandinavia were the products of species migration from the areas of southern and eastern Europe that were ice-free during the last ice age. Indeed, the last glacial period saw Scandinavia covered by a formidable ice sheet.

The migration interpretation of the story is not correct, as the picture of Scandinavian coniferous forests is far more nuanced and complex than previously thought.

"Our results demonstrate that not all the Scandinavian conifer trees have the same recent ancestors, as we once believed. There were groups of spruce and pine that survived the harsh climate in small ice-free pockets, or in refuges, as we call them, for tens of thousands of years, and then were able to spread once the ice retreated. Other spruce and pine trees have their origins in the southern and eastern ice-free areas of Europe. Therefore, one can now refer to 'original' and later naturally 'introduced' Scandinavian conifer species," says Professor Eske Willerslev, Centre for GeoGenetics, University of Copenhagen.

In the midst of an ice age

The spectacular results have emerged, in part, by studying the DNA of modern spruce - which clearly portray two Scandinavian types - and also by analysing the composition of pine and spruce DNA in sediments from lake-core samples. Additionally, researchers analysed other ancient DNA and the remains of macrofossils to reach their conclusions.

Two locations in Norway have proved particularly lucrative for the researchers. One of them, Andøya Island, in north-western Norway, is the source of material dated between 17,700 and 22,000 years-old. During the last ice age, the island was an ice-free pocket, one "refuges" on the edge of the enormous ice sheet, which blanketed at that time nearly all of Scandinavia.

"The other evidence, which supports the surviving conifers in the midst of an ice age, originates in Trøndelag, central Norway. One hypothesis is that trees were able to survive on the top of nunataks, the exposed ridges or peaks of mountains protruding from glacial cover, or in more sheltered areas close to the coast where proximity to the temperate conditions of the Atlantic Ocean favoured survival. These areas must have provided sites for roots to anchor and trees to grow in the challenging climate," says Laura Parducci, University of Uppsala.

Today, nunataks can be found protruding from the Greenlandic ice sheet, though without any trees to adorn them.

According to Inger Greve Alsos, Tromsø University Museum, their results are not just useful within the context of revising the history of Scandinavian conifers.

"The essence of our studies is that they challenge conventional scientific notions of the spreading of trees, biodiversity and survival in harsh environments from a global perspective; especially with regards to climate change or other changes and interventions in nature. I also believe that our results will have economic significance. We now know that there are two types of naturally occurring spruce in Scandinavia. These two trees have very different histories and therefore it can be expected that they have differing qualities – for example in their hardness and the like. Previously, we thought that the differences between naturally occurring spruce in Scandinavia were due to simple individual variations. Now we would like to determine if these differences relate to one or another type of spruce by the use of a simple DNA tests. This will mean a great deal to tree plantation owners and others who would like to grow spruce with particular qualities," explains Inger Greve Alsos. 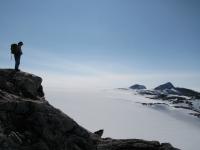