Cells of all life forms are surrounded by a membrane that is made of phospholipids. One of these are the cardiolipins, which form a separate class due to their unique structure. When studying the enzyme that is responsible for producing cardiolipins in archaea (single-cell organisms that constitute a separate domain of life), biochemists at the University of Groningen made a surprising discovery. A single archaeal enzyme can produce a spectacular range of natural and non-natural cardiolipins, as well as other phospholipids. The results, which show potential for biotechnological applications, were published in the Journal of Biological Chemistry.

The phospholipids that are most abundant in cell membranes contain a hydrophilic head to which two hydrophobic tails are connected. Cardiolipins - so-called because they were first identified in heart cells - are slightly different since they are made up of a single head group that is attached to four lipid tails. 'We know which enzymes are responsible for cardiolipin production in bacteria and eukaryotes, but not in archaea,' says Marten Exterkate, who is the first author of the JBC paper.

His interest in these cardiolipins stems from his work on a synthetic minimal cell. 'Our group at the University of Groningen focuses on cell membrane growth, based on the enzymatic production of new phospholipids from basic building blocks.' Since cardiolipins are present in cell membranes of organisms from all domains of life, they are desired components of the synthetic cell. Exterkate wanted to know which enzymes are responsible for cardiolipin production in archaea. 'The lipids that form the cell membrane of archaea are structurally different from those in the other two domains of life,' Exterkate explains. 'Furthermore, while the other domains have one dominant type of cardiolipin, archaea appear to produce different kinds of cardiolipins, with head groups that contain, for example, only a single negative charge or different kinds of sugars or sulphate groups. Currently, we know next to nothing about how they are synthesized.'

By searching the genomes of archaeal species, Exterkate found several gene candidates for cardiolipin synthase. The most promising one from the archaea Methanospirillum hungatei was expressed in a standard laboratory strain of the E. coli bacterium, and the resulting enzyme was isolated and characterized. 'When we mixed the enzyme with potential building blocks, it produced the expected cardiolipin species. But then we noticed something really surprising: another cardiolipin with a very odd head group.' This turned out to be a molecule from the buffer solution in which the reaction took place.

'All the alarm bells started ringing,' Exterkate recalls. 'If the enzyme can incorporate this buffer molecule as a lipid head group, what else could it do?' As it turned out, the enzyme was able to produce all kinds of variant cardiolipins and other phospholipids, containing both natural and non-natural head groups. 'Some enzymes are promiscuous; they can use slightly different variants of their normal substrates. But this enzyme is promiscuous in the extreme.' It can produce lipids that, in bacterial cells, for example, require many different enzymes.

This is the first identified enzyme with the ability to produce an entire range of different cardiolipins. Exterkate: 'Other archaea have similar genes, which are probably also suited to producing different cardiolipins, indicating that the variety in archaeal cardiolipins could be synthesized by the same enzyme.' Apart from being a surprising discovery, the new enzyme could be interesting for the production of self-designed membranes. This is useful because head groups in membrane phospholipids affect the overall properties of the membrane and the function of enzymes that are incorporated in it. 'The biotechnology industry could perhaps use this enzyme to artificially engineer membranes for specific purposes,' says Exterkate.

The discovery of this promiscuous enzyme also raises the question of why archaeal cells need all these different cardiolipins. So far, the textbooks refer to cardiolipins as one particular molecule. It is becoming clear, though, that cardiolipins form a class of molecules. Exterkate and his colleagues suspect that the enzyme is involved in osmoregulation. 'Depending on the environment, the enzyme can switch the production towards different phospholipids and in doing so, alter the functionality of the membrane.'

The enzyme could also turn out to be a bonus for the synthetic cell that Exterkate and his colleagues are working on. 'We planned to produce a membrane with a minimalistic phospholipid composition, so we wouldn't need to add lots of genes for different enzymes. Now, we can potentially produce lots of different phospholipids using only a single enzyme.' 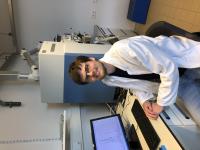