The gadget was successfully used by individuals with limited feeling or movement in their hands due to tetraplegia. These individuals had sustained their injury more than a year before the study, a time frame when most rehab patients see very little improvement for the remainder of their lives. Remarkably, the device was primarily used while the participants were going about their daily routines.

The device is called Mobile Music Touch (MMT). The glove, which looks like a workout glove with a small box on the back, is used with a piano keyboard and vibrates a person's fingers to indicate which keys to play. While learning to play the instrument, several people with SCI experienced improved sensation in their fingers.

Researchers at Georgia Tech and Atlanta's Shepherd Center recently completed a study focusing on people with weakness and sensory loss due to SCI.

"After our preliminary work in 2011, we suspected that the glove would have positive results for people with SCI," said Ph.D. graduate Tanya Markow, the project's leader. "But we were surprised by how much improvement they made in our study. For example, after using the glove, some participants were able to feel the texture of their bed sheets and clothes for the first time since their injury."

Markow worked with individuals with SCI who had limited feeling or movement in their hands. Each suffered a spinal injury more than a year prior to the study. The eight-week project required study participants to practice playing the piano for 30 minutes, three times a week. Half used the MMT glove to practice; half did not.

The MMT system works with a computer, MP3 player or smart phone. A song, such as Ode to Joy, is programmed into a device, which is wirelessly linked to the glove. As the musical notes are illuminated on the correct keys on the piano keyboard, the gadget sends vibrations to "tap" the corresponding fingers. The participants play along, gradually memorizing the keys and learning additional songs.

However, these active learning sessions with MMT were not the primary focus of the study. The participants also wore the glove at home for two hours a day, five days a week, feeling only the vibration (and not playing the piano). Previous studies showed that wearing the MMT system passively in this manner helped participants learn songs faster and retain them better. The researchers hoped that the passive wearing of the device would also have rehabilitative effects.

At the end of the study, participants performed a variety of common grasping and sensation tests to measure their improvement. Those who used the MMT system performed significantly better than those who just learned the piano normally.

"Some people were able to pick up objects more easily," said Markow. "Another said he could immediately feel the heat from a cup of coffee, rather than after a delay."

Markow believes the increased motor abilities could be caused by renewed brain activity that sometimes becomes dormant in persons with SCI. The vibration might be triggering activity in the hand's sensory cortex, which leads to firing in the brain's motor cortex. Markow would like to expand the study to include functional MRI results.

The glove has evolved in recent years under the leadership of Georgia Tech's Thad Starner and Ellen Yi-Luen Do, as well as Deborah Backus, director of multiple sclerosis research at Shepherd Center. The initial concept, Piano Touch, developed with the team by then master's student Kevin Huang, demonstrated that people could easily learn to play the piano by wearing the glove and feeling its vibrations. It didn't take long for Starner to see the larger health benefits.

"Equipment used for hand rehabilitation may seem monotonous and boring to some, and doesn't provide any feedback or incentive," said Starner, who oversees the Contextual Computing Group. "Mobile Music Touch overcomes each of those challenges and provides surprising benefits for people with weakness and sensory loss due to SCI. It's a great example of how wearable computing can change people's lives." 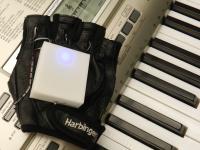 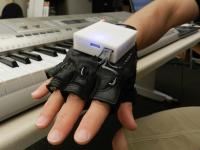