Muskrat populations declined sharply across North America over the last 50 years or so, and wildlife scientists have struggled to understand why. A Pennsylvania research team investigated whether pathogens, parasites, environmental contaminants and disease may be contributing to this decline.

Trappers saw steep declines in muskrat harvest throughout the animal's native range, with decreases exceeding 50% in some states, according to David Walter, Penn State adjunct assistant professor of wildlife ecology in the College of Agricultural Sciences. In Pennsylvania, for example, according to the state Game Commission, the muskrat harvest declined from 720,000 in 1983 to 58,295 in 2010.

"Some of that decline can be attributed to a reduction in trapping activity, but clearly the muskrat population is significantly smaller than it used to be," he said. "A number of theories to explain the widespread muskrat declines have been proposed, including habitat loss, predation, environmental contamination and diseases. In this study, we examine a number of those possibilities."

To analyze trends in muskrat mortality, researchers pored over 131 articles, published from 1915 to 2019, from 27 U.S. states and nine Canadian provinces that contained information about muskrat exposure to diseases and contaminants and mortality events. Information collected from articles included; year of survey; location of survey; methodology; number of animals surveyed; pathogen or contaminant identities; and the presence or absence of associated disease, as evidenced by reported clinical signs or lesions.

Among the common factors reported associated with muskrat infections or mortality in some cases were: viruses including canine distemper virus, rabies and Aleutian mink disease virus; a variety of fungal infections; ailments such as tularemia and Tyzzer's disease; cyanobacteria, possibly indicating the presence of toxic algae; parasites including protozoans, trematodes, cestodes, nematodes and ectoparasites such as ticks; toxins, including heavy metals from industrial discharges and lead from ammunition deposits; and agricultural-related contaminants including pesticides, herbicides and insecticides.

Because of the wide range of differences in how the many authors had collected information about the factors in muskrat deaths, the researchers were unable to draw solid conclusions about which pathogens or contaminants may be contributing to declining muskrat populations. However, the findings, recently published in Frontiers in Veterinary Science, were the first holistic review of muskrat mortality ever compiled.

The study provides a baseline for understanding the potential role of pathogens, contaminants, parasites and diseases in the declines of muskrat populations across North America, noted lead researcher Laken Ganoe, who conducted the work as part of her master's degree thesis in wildlife and fisheries science.

"These data highlight critical knowledge gaps about muskrat health investigations and the circumstances surrounding and contributing to their decline that warrant future research efforts," she said. "There is still much that we do not understand about why muskrats are disappearing, and to protect them into the future we need to better understand not only disease dynamics, but how other factors such as ecosystem dynamics and climatic factors are playing a role as well."

In earlier research, done in collaboration with the Pennsylvania Game Commission, Ganoe collected muskrat carcasses from Pennsylvania trappers and conducted necropsies to develop a snapshot of muskrat health and exposure in the state, which included tissue sample collection and screening for a wide variety of pathogens and contaminants. She also captured muskrats, surgically implanted them with radio transmitters and then tracked them using radio telemetry, to determine their movement patterns, home range size and survival.

The Pennsylvania Game Commission and the U.S. Geological Survey funded this research.

Many factors may contribute to steep, decades-long muskrat population drop 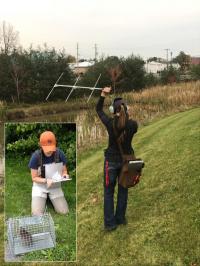